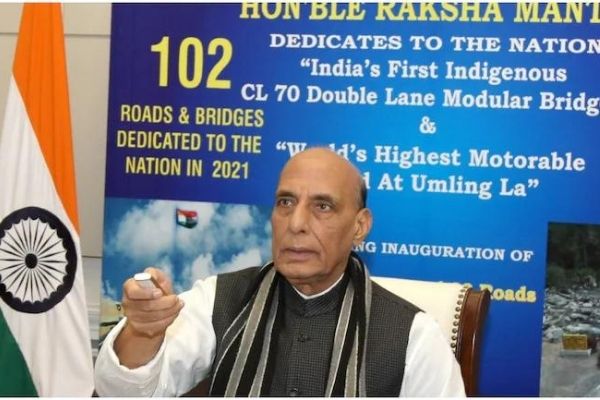 The Union Defence Minister Rajnath Singh, virtually inaugurated 24 bridges and three roads constructed by Border Roads Organisation (BRO), in border states on Tuesday. Out of 24 bridges, three bridges inaugurated on Tuesday are in the Pithoragarh district of Uttarakhand. The bridges include Ghasku bridge which connect Tawaghat to Ghatiya Bagad, Gauri Garh bridge connecting Jauljibi to Munsiyari and Badamgarh bridge which connect Simli to Gwaldam. Uttarakhand Chief Minister Pushkar Singh Dhami also participated in the virtual inaugural function of the bridges on Tuesday.

Congratulating the officials from Border Roads Organisation, the Defence Minister said “The development in the border areas of the state has tremendously reduced the travel time which will strengthen the infrastructural development in the areas paving way for better education of children and health facilities for all.”

As a part of the Azadi Ka Amrit Mahotsav, BRO café’s will be established at 75 places of the border states across the country, added Singh.

The CM said “The bridges, roads and tunnels constructed by BRO, will further strengthen Prime Minister Narendra Modi’s vision of Atma Nirbhar Bharat. Better road connectivity in border areas of the states will translate into better facilities and opportunities for the local people.”