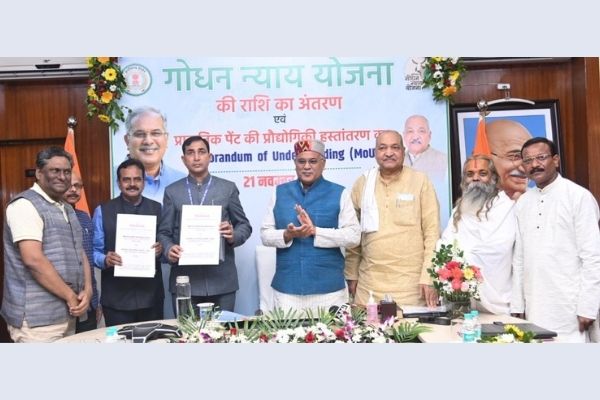 Rural economy has got a new impetus with the Gothan and Godhan Nyay scheme built in villages for the conservation and promotion of livestock by the Government of Chhattisgarh. So far, cow dung worth more than Rs 116 crore has been purchased in Gauthans under the Godhan Nyay Yojana. The production of Vermi Compost and Super Compost is being done on a major scale in about 7800 Gauthans of the State by the women’s groups from the purchased cow dung. The cost of compost manure produced and sold to date is over Rs 100 crore. The enthusiastic participation of the villagers in the Godhan Nyay Yojana has not only made it popular, but the results that have come before us through this are very pleasant.

Godhan Nyay Yojana is such a unique scheme in itself, which has incorporated multi-dimensional objectives in itself. In the initial phase of this scheme, there were many questions and apprehensions in the minds of the people regarding its success, which has been proved to be futile by the Gauthan Steering Committee and the women associated with Gauthan. With this scheme, a new atmosphere of enthusiasm has been created in the villages. New employment opportunities have increased. Organic farming is encouraged and livestock farmers and villagers have got a means of additional income. Women Self Help Groups (SHGs) have got a new way of self-reliance through Gauthan and Godhan Nyay Yojana.

Also Read: UP Government-Sponsored Startups Display their Prowess to Global Investors in Dubai

With the aim of protecting and promoting livestock as well as giving them a source of fodder and water, in coordination with the Gauthan and Godhan Nyay Yojana established in the villages, in fact, Gauthan is now becoming a new source of livelihood for the villagers. The dedication and hard work with which the income-oriented activities are being successfully conducted by the women groups in the Gauthans is commendable in itself. Chief Minister Bhupesh Baghel says that our villages have been at the centre of power. Rural resources have so much power that they can run the economy of the state and the country. If we want to increase the pace of development by staying connected with our culture, identity, self-respect and respect, then the best means for this is such a development, in which a large number of rural people have direct participation, while preserving and adding value to our traditional resources.

Godhan Nyay Yojana and Gothan are actually the plans of the villagers and it is run by them for their own good. Under the Godhan Nyay Yojana, the figure for the purchase of cow dung has crossed 116 crores. This is no small thing. Those who sell and buy cow dung and prepare various products from vermicompost to it belong to the village itself. It is clear from this that villages can become the centres of employment and production, which is the objective of Gandhiji’s Gram Swaraj. Chhattisgarh government is moving fast towards fulfilling the dream of village swaraj through Suraji Gaon Yojana – Narva, Garuwa, Ghurwa, Bari and Godhan Nyay Yojana.

Under Godhan Nyay Yojana, till now dung worth Rs 116.63 crore has been purchased in Gauthans. While Rs 41.96 crore has been distributed to Gauthan committees and Rs 27.44 crore has been distributed to women SHGs. From making vermicompost in Gauthans to earning income, the women of the group are working diligently. Their dedication and hard work have proved that no matter how odd the circumstances are, they can be defeated with effort. Women’s groups have created a new record by preparing high-quality vermicompost and super compost manure. Neighbouring states have also started demanding vermicompost produced in the Gauthans of Chhattisgarh. The state of Jharkhand has received orders for the supply of one and a half lakh quintals of vermicompost to Raigad district. It’s a matter of pride. Farmers of border states adjoining Chhattisgarh state are also buying vermicompost by coming to Gauthans in the border area of Chhattisgarh. Getting the Skach Gold Award for the Godhan Nyay Yojana of the Government of Chhattisgarh is a proud achievement for the state.

So far, 10 thousand 584 Gauthans have been approved in the state under Godhan Nyay Yojana, out of which 7836 Gauthans are built and operated. About 44.82 per cent of the beneficiaries of this scheme are women. More than 89,000 landless families have got access to additional income through this scheme. So far over 9.79 lakh quintals of vermicompost and 4.21 lakh quintals of super compost have been produced by women groups in Gauthans. The purpose of generating electricity from cow dung has started in Gauthans. Now preparations are being made to start the work of manufacturing natural paint from cow dung. With the successful purchase of cow dung and conducting income-oriented activities in Gauthans, 2029 Gauthans have become self-supporting. This is the result of the significance of Godhan Nyay Yojana and the benefits that accrue through it.