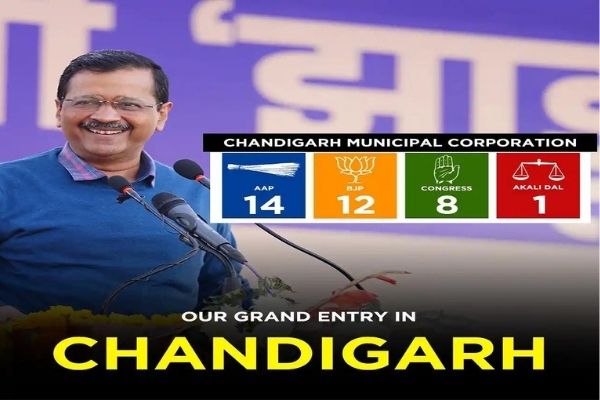 A day after the Aam Aadmi Party scripted history in the Union Territory of Chandigarh by winning 14 out of 35 municipal wards in the city in its debut performance, the race is on for parties to get their candidate elected as Mayor of City Beautiful.

The Union Territory, administered by the central government, witnessed an intense, high decibel municipal election on December 24, 2021, the result of which was declared on Monday.

Aam Aadmi Party scored a surprise win despite running a low key political campaign with several fresh faces being fielded as candidates. Just two prominent leaders, Arvind Kejriwal and Bhagwant Mann made a limited number of appearances even as the party managed locally without much previous base.

The BJP had however launched an intense campaign roping in several chief ministers and union leaders and touted the PM card. The party managed to garner only 12 wards ending a lame second. The Congress party won 8 wards and the Akali Dal party 1 ward.

Party leaders Pradeep Chabbra and Chandermukhi Sharma told media after the party’s victory that people were unhappy with the previous government’s performance that saw the city plummeting from its rank in cleanliness ratings. AAP had promised to cleanse the system of corruption in the Municipal Corporation on the lines of Delhi-like model of governance.

The party’s promise of free 20,000 litres of water to every family per month has apparently struck a chord with the people upset with hiked water tariff rates (200 times last year). The party also promised free door to door waste collection, mohalla clinics and free primary education.

A precursor to Punjab polls?

The success of the Aam Admi Party in Chandigarh MC elections, ahead of assembly elections in Punjab, are being seen as the popular mood among voters by party leaders. AAP Punjab unit convenor Harpal Singh Cheema said the Chandigarh win would “build an opinion in favour of the party among the people”.

“Chandigarh is not different from Punjab. Daily, thousands of Punjab residents visit Chandigarh. They will go back to their homes and carry the desire for change. We will also work to sustain the momentum,” Cheema told media after the poll results were declared.

Party MLA from Delhi, Raghav Chadha, who is also the incharge of Punjab polls in the party said that the success in Chandigarh Municipal Corporation election is “only a trailer, the movie would be Punjab Assembly polls” set to be held early next year.