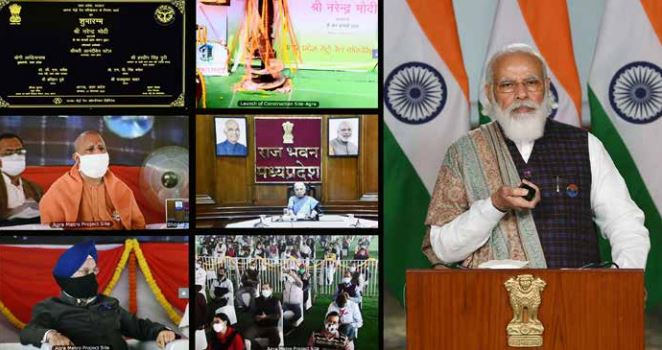 Speaking on this occasion, he said that reforms are now being carried out in a wholesome manner rather than in piecemeal manner. He also remarked that for the development of cities work has been done at 4 levels- Resolution of long standing problems, Ease of living, Maximum investment, and More use of modern technology.

The Prime Minister pointed out that one of the major problems of the country’s infrastructure sector has been that new projects were announced, but not much attention was given to where the money would come from. He added that his government has ensured the necessary funds at the start of the new projects itself. He said that more than Rs 100 lakh crore will be spent under the National Infrastructure Pipeline Project. Work is also being done on the Multi-modal Connectivity Infrastructure Master Plan.

He added that efforts are on to attract investment from all over the world to improve the country’s infrastructure.

In his address to the people of Agra, PM said, “I congratulate you all on the inauguration of commencement of Agra Metro’s construction work. Agra has always been known to the world for its heritage and historical value, but with a world class Metro system, Agra will now also be known for advancements. The city which carries a history of centuries is now ready to walk shoulder to shoulder with the pace of the 21st Century. To strengthen the position and economy of the city, many projects are already being executed in Agra and now this mega Metro project with a budget of over Rs 8000 crore will strengthen its vision of a Smart City. India has seen an expansion of Metro rail Network of around 450km in the last 6 years and it is targeted to reach a 1000 km mark by 2022.

“It’s a matter of immense pride that these metro rail coaches are also being manufactured in India which gives strength to our mission of a Self Reliant India and gives boost to the Make in India vision. A world class Metro Project in Agra will not just enable ease of travelling for the locals and tourists, but will also help boost the economic sector of the heritage city. It is extremely important to empower small cities as they have ample skill set, raw material, production and service sectors and in such a scenario, development projects like these help small cities to grow and thrive at par with the big cities. With the hope that developmental works will continue to progress at the same pace, I once again congratulate you all on the inauguration of the ambitious Agra Metro Project,” he said.

Terming tourism as a sector in which there are means of earning for everyone, the Prime Minister informed not only has the government increased the number of countries covered under the e-Visa scheme, it has also reduced the tax on hotel room tariff significantly. Efforts are also being made to attract tourists through schemes like Swadesh Darshan and Prasad, he added.

The Prime Minister said there was a trust-gap between the builders and the home buyers. He said people with some wrong intentions brought disrepute to the entire real estate sector, upsetting our middle class. He said RERA’s law was introduced to remove this problem. The Prime Minister said Pradhan Mantri Awas Yojana was inaugurated from Agra and under this scheme more than 1 crore houses have been approved for the urban poor. For the middle class of the city, help is being provided to buy houses for the first time. He said so far, more than 12 lakh urban middle class families have been given help of about Rs 28000 crores to buy houses. He said Infrastructure like water, sewer are being upgraded in several cities under AMRUT mission and help is being given to local bodies to make public toilets better in cities and to implement a modern system of waste management. The Prime Minister informed that post 2014, 450 km metro line has been operationalized as compared to mere 225 km before that. He also informed that work on the 1000 km long metro lines is progressing expeditiously. This work is on in 27 cities of the county.

Chief Minister Yogi Adityanath expressed his gratitude to PM Narendra Modi and welcomed him on behalf of everyone present and the people of Agra. In his welcome address, he said, “This is a very auspicious day as Agra is getting the gift of a world class metro system and I congratulate the people of Agra, UP Metro Rail Corporation and all those associated with the project on the inauguration of construction work of Agra Metro Project. It is because of relentless efforts by Hon’ble Prime Minister Shri Narendra Modi that development projects like these are being made possible in such a short span of time. The construction work of Kanpur Metro is progressing at a very fast pace. Similarly, Agra Metro will not only benefit the population of 26 lakh but also over 60 lakh tourists who visit Agra every year. I feel honoured to say that this is the beginning of a new era of development in Agra.

” Kumar Keshav, MD, UPMRC said, “It is my and the entire team’s honour that Hon’ble Prime Minister of India inaugurated the construction of Agra Metro Project today. This is a very ambitious project and a gift of the Government to the city of Agra which holds both economic and cultural significance. We at UPMRC are determined to execute this project with all our might, just like we have delivered in Lucknow and the ongoing Kanpur Metro Project. No project can be executed successfully without the co-operation and support of the people of that city and I am very hopeful that the people of Agra will stand with us and co-operate as we take forward the construction of this prestigious Metro Project.”

Some Info about Agra Metro Project