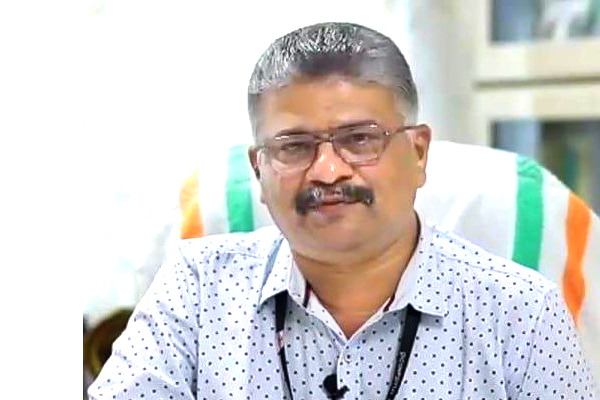 With undulating topography, the occurrence and availability of groundwater in Kerala varies. Also, with the rising urbanisation and population, the stress on groundwater resources have spiked. Hence, the judicious use and effective management of water resources has become the need of the hour. To aid this, Kerala launched ‘Vattatha Uravakkay Jalasamrudhi’ programme, writes Nizamudeen A, Land Use Commissioner and Director, Kerala State Remote Sensing and Environment Centre (KSREC).

Kerala, the land of rivers, backwaters, plantations, beaches and forest with bountiful rainfall is having unique landscapes with rich and varied natural resources. However, the occurrence and availability of groundwater vary considerably from place to place within the state depending on the prevailing climatic, geomorphological and hydrogeological conditions. And, with increasing population, rapid urbanisation and industrialisation have resulted in increasing use of groundwater over the last few decades in Kerala. Hence, planned development of groundwater and its scientific management is a dire need now to ensure the long-term sustainability of the water resource.

The main cause of drought in the state is not a decrease in rainfall rather the state’s inability to store water. Rainwater quickly washes away into the sea because of the peculiar geographical characteristics of the State. Therefore, ‘Vattatha Uravakkay Jalasamrudhi’ is a Participatory Groundwater Management programme implemented in Kattakada constituency, Kerala as a bold experiment. It has achieved scale and captured the popular imagination. Perhaps it is best suited for Kerala’s context but it has truly created opportunities for people to participate in a movement.

Kattakada constituency, once prosperous and sufficient in water availability, was facing acute water shortage from mid-2000, in spite of the presence of two main rivers, numerous streams, canals and ponds. IB Sathish, MLA, put forth a suggestion before the people’s representatives and the government officials to make the constituency’s water sufficient by five years.  Preparation of a scientific Water Resources Management plan is a proud story of this people’s movement. Kerala State Land Use Board (KSLUB) with the help of Government departments, Kudumbasree workers, volunteers and MGNREGA workers collected the spatial and other details on water-related problems in 122 wards coming under 14 micro watersheds.

‘Jalasamrudhi’ works with the simple logic to collect rainwater where it falls and replenish groundwater. District administration and three-tier panchayats were very active with the people in this water conservation drive. A variety of water conservation activities was implemented including artificial recharging in public institutions, new farm ponds, rejuvenation of streams and ponds, revival of paddy lands, innovative models of water conservation, etc. Water literacy campaign on reducing and reuse of water was also organised. The role of youth in the programme needs special mention. Water clubs were formed in all 68 schools. Water Parliament and Water Assemblies led directly by students became national models.

KSLUB prepared a comprehensive database on existing water resources through primary data collection coupled with satellite image interpretation. The entire database has been brought in the GIS platform. The database was enriched by the secondary data and fine-tuned through user interaction workshops and stakeholder discussions. A series of seminars, discussions and training were conducted to ensure the community participation in project planning.

The existing water resources were identified with its problems and the reasons for the present situation. Based on detailed discussions, exploring the possibility of conserving the water received through rainfall, rejuvenation/revival of deteriorated water resources and creation of new water storage structures were evolved.

Lowering of the water table – Kattakada constituency and the neighbouring areas fall under the semi-critical category. As per the data of the State Ground Water Department, the level of water table in the observation Well at Nemom, has gone down to 5.80 m below ground level during 2016, which was 2.5 m below ground level during 2007.  Similar statistics were noticed in the other observation wells located in the Constituency.

Drying wells and poor water quality – The primary information gathered during the survey revealed that out of 43043 wells, the main drinking water source of the people in the constituency, 19681 wells dry up in summer.  In addition to this, the quality of available water was also poor in some areas.  There are instances of saltwater intrusion in parts of the Constituency.

Reduction in wetlands/paddy lands – Satellite image interpretation with ground truth verification conducted by KSLUB shows that the extent of wetlands (paddy lands) has decreased drastically from 1291.31 hectares to 104.67 hectares. Paddy lands which are the water bowls of the area have been converted to built-up areas or brought under other plantation crops, which also accounts for scarcity of water and drought.

The project was officially launched on March 22, 2017, World Water Day. ‘Jala clubs’ were formed in all 68 schools in the constituency to sensitize and ensure the participation of students in water conservation activities. A volunteer committee of five members in each ward, ‘Jalamithrams’ were selected and trained by Suchitwa Mission and Youth Welfare Board. Mass awareness programmes such as rallies and public functions were organized with the active participation of students, Kudumbashree, NGOs, National Service Scheme (NSS) units, youth clubs and Students Police Cadets.

Neerthada Samrakshana Yathra (Stream walk) – Neerthada Samakshana Yathra was conducted in three streams to create awareness among the general public on the need for conserving the water and making the streams perennial. Stream walk was organized in Kollodu Anthiyoorkonam Anappad thodu, the major stream of the biggest subwatershed (2K27), Kulathummal thodu, the main drain of 1N7a, micro watershed and Vilappilsala Kollakonam thodu, the main drain of 2K25 a micro watershed.

Artificial recharging – Artificial recharging is successfully implemented in 40 public institutions, including schools and government offices. The programme is executed by the State Ground Water Department in three phases. Rainwater is collected from the rooftops and channelized into recharge pits constructed near the open well. 8,000 litres of rainwater is collected per pit per rainy day. The success of this programme is evident from the fact that the wells in these institutions have not dried up for the last two years.  Kattakkada is declared as the first Constituency to complete Artificial Recharging in all public institutions.

Farm ponds – Major contribution of Mahatma Gandhi NREGA for the Jalasamrudhi programme is the construction of 300 plus farm ponds. Even though there was a little hesitation during the initial phase for the big farm ponds, people started accepting the new concept after seeing the positive results in the field.  The open dug wells near the newly constructed farm ponds turned perennial during summer. This has resulted in the construction of 327 new farm ponds in two years. With an average size of 10 m x 10 m x 3 m, each pond harvest 300 m3 of water every rain.

Mini drinking water schemes – Another notable feature is the implementation of mini drinking water schemes in selected areas where water scarcity was very severe. The project area was selected after the scientific study by the State Groundwater Department In the first phase, field study was conducted in 17 areas and eight suitable sites were identified for implementation. Ward members took the lead in field study and formation of Beneficiary Committees. The water was pumped from an identified water source to an overhead tank.  Water connections were provided to individual households.  The project was a boon to the locals who were fetching drinking water from long distances.

Protection of water bodies using coir geotextiles – Measures to protect the sides of ponds and streams using coir geotextiles was started on an experimental basis. Work of cleaning the sides of ponds and streams was done under Mahatma Gandhi NREGA. Technical assistance was provided by the National Coir Research Institute. The engineers provide instructions for adjusting the slope on the sides of the stream and lying of coir geotextiles. Many streams and ponds have been protected in this manner. It is noteworthy that this helped in increasing the production of coir and the employment opportunities of the people, along with the protection of water resources in an eco-friendly manner.

Inland fisheries – Another major achievement of the programme is the introduction of inland fisheries in the ponds, with the association of Fisheries Department.  Initially, six ponds were taken during the first year under the technical and financial assistance of the Fisheries Department.  The activity was carried out by User Groups formed among the local people.  A fish yield of 5790 kg amounting to Rs. 10.78 lakhs was harvested from these ponds.  From the second year onwards, this was extended to 42 ponds.  In addition to the income, these ponds are well protected by the User Groups, which improves the groundwater status of the area.

Recharging from quarry ponds – Innovative well recharge model utilising water in a quarry has been successfully implemented in association with Mahatma Gandhi NREGA. Water from the quarry is channelized using a pipe to a recharge pit, with sand, gravel and charcoal filter, dug near a well 500 feet away and 200 m below the quarry.  The water availability of 15 wells in the nearby houses turned perennial.  In addition to this, to harvest the water overflowing from this quarry during the rainy season, a new pond (5 m long x 4 m wide x 1 m deep) was constructed on the lower side of the quarry and the water is diverted to this pond through a channel.

Harvesting water from flooded roads – Location-specific solution to resolve the flooding in a road was experimented under the project and turned successful. A 4 m long, 1.5 meters wide and 2-meter pit was constructed on the side of the road. A gentle slope from both the sides was provided towards this pit enabling the water to flow to this pit. The side of the pit adjacent to the road was plastered so that the water does not percolate beneath the road.  A honeycomb structure was followed to pave the stones so that the water infiltrates down the soil through the other three sides. The experiment was successful in overcoming the flooding and also helped to recharge the wells down the site. The activity was done in collaboration with the Public Works Department.

Installing scales in ponds – Measuring scales and indication boards were installed in the selected 100 ponds with the assistance of Haritha Keralam Mission.  This helps the local people and planners to monitor the available water in each pond.  This gives indications in the rise of water level as a result of the various water conservation activities undertaken in the area.  This is a step forward for the water budgeting of the area.

National Service Scheme Summer Camps – The seven-day long summer camps of National Service Scheme units of Higher Secondary Schools were redesigned and camps were planned near a water source.  The students conduct house to house campaigns on the need of the water conservation and plant trees in the households. Each camp cleans a water source (pond/drain) with the help of local people.

Through the integrated approach adopted in the Constituency under ‘Jalasamrudhi’ programme, it is found that the groundwater level was increased, which is substantiated by the observation wells in the area. 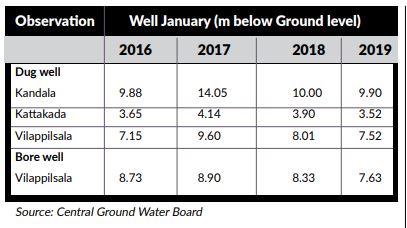 In the fourth edition of the World Reconstruction Conference held in Geneva in May 2019, Jalasamrudhi was introduced as a noble integrated model for water conservation. The integrated watershed management techniques used here were referred to in a paper presented by Paul Van Meel, Team leader of Dutch Risk Reduction Team.  Earlier a team from the Netherlands had visited Kattakada to study the successful model of water conservation.  The major highlights mentioned by Paul Van Meel are

‘Kattakada Jalasamrudhi’ proved that resources become endless when Departments and Local Self Government Institutions come together in a harmonious way. ‘Jalasamrudhi’ model sets a benchmark that could be implemented across nations.

Effective storage and management of water is equally important as is the availability.  Public participation has led to ownership and helped in long-term sustainability of the interventions.   Restoration and maintenance of water resources should be a continual process and local people should be trained to manage their resources.