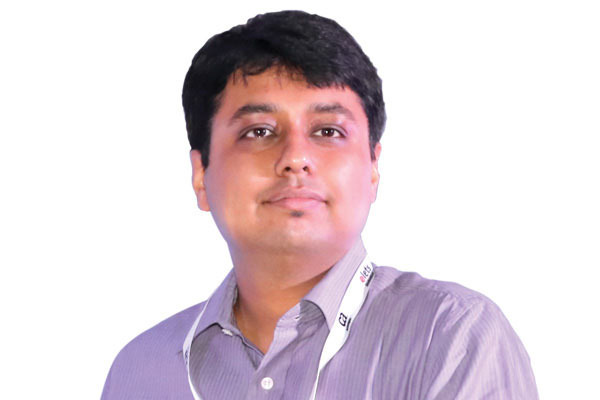 Almora city of Uttarakhand depends on the river Kosi for its drinking water, irrigation and other needs but the water level of the river has been dwindling over the last three decades. To reinvigorate the dwindling river, scientifically managed restoration work is being carried out, which involves clear demarcation of recharge zones, augmenting their water holding capacities and undertaking massive plantation drives, writes Nitin Bhadauria, District Magistrate, Almora, Uttarakhand.

River Kosi is a rain-fed river, which forms the lifeline of Almora district in India. Due to developmental activities, deforestation and a reducing rainfall pattern, the perennial river Kosi turned into seasonal as water discharge flow fell. Since rivers in Kumaon Himalayas are generally rain-fed, this region was facing acute water shortage as the rainfall was running off the slopes. Thus, there was a dire need to rejuvenate river Kosi.

To rejuvenate Kosi, more than 74 million litres of waterconserving capacity has already been created that has increased mountain water-table. The water conservation efforts made by the district authorities include digging of infiltration holes, infiltration trenches, bio-percolation barriers, infiltration tanks, check-walls and ponds, besides taking up plantation works on a large scale.

Kosi rejuvenation project is based on geographically identifying recharge zones and geo-tagging all works (plantation, water conservation) using the latest GIS technology. Such innovation in the implementation of the project has also made the project highly replicable. The project was planned based on a communitybased participatory approach to turn it into a community movement by making them stakeholders in the project. The benefits of the project include an increase in the plantation cover and water holding capacity and increased awareness of water conservation activities in the communities involved.

With the community involvement, it has turned into a movement as it has created awareness about sustainable practices, environment-friendly activities and the importance of rainwater harvesting water conservation structures. A common theme across the region has strengthened the community networks. It is now gradually being replicated in the other districts of the state of Uttarakhand in India as well.

A detailed scientific feasibility study was conducted in partnership with Prof JS Rawat, Head of Department, GIS Cell, Kumaun University and a Fulbright Scholar. The flow pattern of the river was studied over a while and the permeability of the internal rock structure so that area where intervention needs to be made could be identified. A detailed work plan was then drawn based on this study. The drainage area was divided into 14 recharge zones. The works to be done were mapped on GIS maps with proper latitude and longitude readings.

In each recharge zone, the following works were done: Tree Plantation Activities, around 1,84,86,280 Infiltration holes were made, 2,010 Bio-check dams were created, Infiltration Trenches for about 11,96,057 m were dug, 152 Dry-stone check dams, and 375 Ponds were created.

Thus, a clear plan was formulated on the activity to be taken up and the area where it was to be carried out, with the GIS map for the same. Depending on whether the activity to be undertaken was in revenue or in forest area, MNREGA and CAMPA funds were utilised for implementation purposes, respectively. The core team was then identified and there were nodal officers designated for each recharge zone for implementation.

The works to be taken up were standardised for maximum results, wherever possible scientifically, by a group of experts. For infiltration trenches, the maximum length and breadth were standardised as well as the distance between them. Thus, standard site-specific works were planned and taken up for optimum results.

To involve people and encourage community participation, each of the 14 recharge zones were handed over to an organization be it Army (13th Sikh Battalion stationed at Almora), paramilitary forces (Indo-Tibetan Border Police Force based at KosiKatarmal), NGOs (Syahi Devi Vikas Samiti at Sheetlakhet) or to a Panchayati Raj Institution (Block Development Office at Hawalbagh). The objective was to ensure the survival and monitoring of the saplings planted. Each of the plantation areas was bounded by barbed wires to prevent them from grazing, which was then handed over to the Gram Panchayats, Village Management Committees of schools, NGOs and other institutions for increasing community ownership of the programme and ensure that the programme turns into a selfsustained community movement.

School-children and community were actively engaged in the tree plantation activity, where planted saplings were adopted by them. They were made responsible for watering and ensuring their well-being.

Community Activities Conducted for the Project 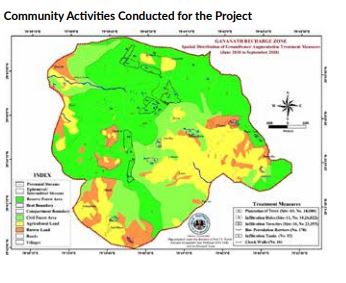 All the works that have been executed in the Kosi rejuvenation project have been planned keeping the local community in the focus. Right from the planning to the implementation of the project, local villages and groups have been involved. Plantation, construction of trenches, infiltration holes, check dams are works that have been done by the villagers themselves as they were already familiar with implementing MNREGA works. Community mobilisation activities were planned in partnership with the Panchayati Raj Institutions. Specific orientation workshops were organised to familiarise the people with the activities to be taken up. These workshops were organised at block levels and then, at village levels so that people were suitably oriented towards a common aim. 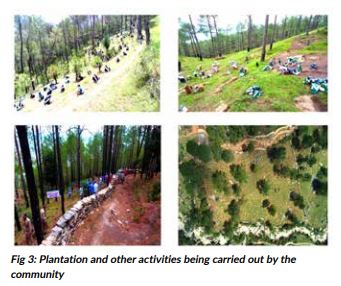 Benefits of the Project

Sustainability – The water harvesting structures created under MNREGA are easy to construct as the villagers already have an expertise in executing MNREGA works and the ownership of the assets lies with the community itself. Once the structure fills up, it can be cleaned up easily, thus, making the assets created under the project long-lasting and highly sustainable. Further, the high community involvement in planning and implementation has made the project itself, self-sustaining.

Cost-effectiveness – The programme utilises already available funds from MNREGA. The works taken up are approved under MNREGA, which are readily available in all the districts. Hence, no extra funds are required by the districts for implementation of the initiative, making it cost-effective.

Transparency – GIS mapping and tracking has been taken up for all the plantation sites with their latitudes and longitudes including the pictures of each plantation site at the inception and post-implementation. Thus, complete transparency in the implementation has been ensured. Timeline analysis of all the plantation and work sites is done by taking pictures of the captured latitude-longitude to ensure their tracking and changes over a period of time. All the documents of the project come under the purview of the Right to Information Act and hence, freely available under the public domain. 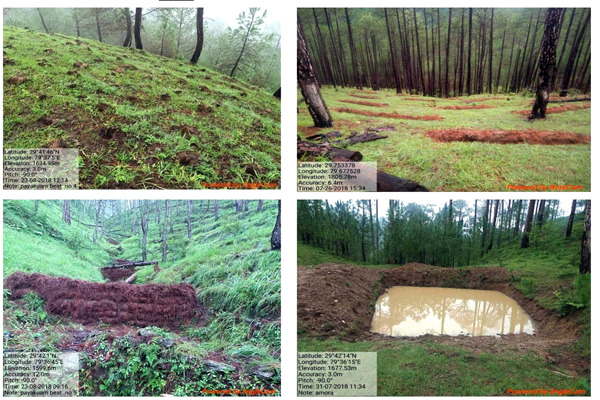 Accountability – The MNREGA work plan for the village is made in partnership with the villagers themselves, in an open meeting. It makes them accountable for works that they themselves want to take up. Post-implementation, these works undergo through rigorous social and financial audits conducted by a group of expert teams. Responsibility is also fixed for any deviations and any financial irregularity is duly punished. Thus, it makes every stakeholder of the project duly accountable at every stage of the implementation of the project.

Scalability – Since, the project consists of works which can be implemented in any area, it is highly scalable. In Almora district itself, the project has been scaled up to include the revival of rivers Ramganga, Jataganga and Gagas as well. GIS-mapping can be easily done once the training is given on it, thereby providing a scientific basis to implementation.

Replicability- Kosi Rejuvenation Project is based on geographically identifying recharge zones and geo-tagging all works (plantation and water conservation) use latest GIS technology. Such innovation in the implementation of the project has also made the project highly replicable. It utilises MNREGA funds which are readily available in all the districts. All the practices are well documented and mapped on GIS portal. Common people of towns and villages living in the recharge zones of the river are well aware of the practices to be able to implement them each successive year.

Kosi rejuvenation project has been identified as a ‘critical project of national importance’ by National Mission on Himalayan Studies, Ministry of Environment and Forest, Government of India. The project has received funding for expansion and monitoring based on the progress done by district administration. It has won several accolades including the “National Water Award – 2018” by the Government of India and is also an Indian national record holder listed in the Limca Book of National Records. At Limca Book of Records, the Kosi project was awarded under the ‘maximum number of tree plantations in an hour’ category which were 167,000. It was also adjudged the best project for CM Excellence Award in Uttarakhand (2018-19).