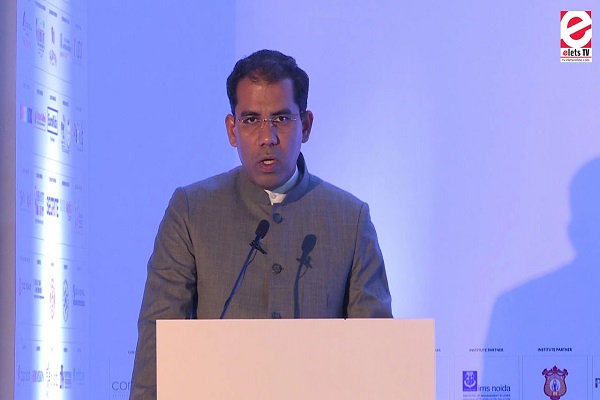 Elets Technomoedia organised India Transformation Summit from July 10 to July 12 to bring in light the rapid growth and development the nation has witnessed in the past few years. Ashutosh Pednekar, Managing Director, Rajasthan State Industrial Development and Investment Corporation (RIICO), Government of Rajasthan addressed the session on ‘the role of state PSUs in transforming India’.

Mr Pednekar commenced his address by presenting a brief on RIICO saying, “RIICO is one of the oldest PSUs in the state. It is a 50 yr old PSU… We are tasked with infra development and also we are the investment arm of Rajasthan.” Though RIICO is primarily an organisation for infrastructure development, this field is also kept open for the private players as well. This means that RIICO is in direct competition with the private sector, he added.

“RIICO has been the profit-making organisation since its inception. And, in fact, this current year has also been good with a 325 percent increase in terms of the sales of industrial land”, told Mr Pednekar. Further, speaking on the steps Rajasthan is taking to fetch more investments in the state, he said, “One of the moves is,  we have a favourable policy environment – Rajasthan Investment Promotion Scheme (RIPS). The scheme, as we believe, is an effective measure to lure investments in the state. Apart from the policy environment, on a strategic level, we believe that the location advantage gets us investment. For example, the Delhi Mumbai corridor which has its 60 percent area in Rajasthan has helped to get more investments. The ‘dedicated freight corridor’ is also an important aspect for us to lure investments.”

Further, he said, “We have been concentrating on the petrochemicals and petroleum industry because we have the second-largest crude oil reserve in the country. Also, a massive refinery worth Rs 56,000 cr is coming up in Barmer district. We are now targeting for a long term investment of Rs 1 lakh crore for an anchor unit of HPCL which is the refinery being set up at Barmer.” Apart from this, the organisation is focussed on a specific investment. For example, we have a Japanese zone in Neemrana where 45 Japanese countries are based like Honda, etc. and this has been a successful model which was first done by us and now is being replicated in other parts of the country as well, Mr Pednekar added.

Moreover, “We are also focussing on the cluster approach. We are also concentrating on the ceramic and the glass industry wherein we are coming up with a big Ceramic Glass zone near Neemrana.” One of the weaknesses identified was in the service sector. Hence the focus is also encompassing the IT, Finance, and Technical service sector, he added.

Apart from this, “Pharmaceutical sector, medical equipment, sports and toys goods sector, the zones for which we had already launched in the state. Hence, the overall strategy is to leverage the favourable policy environment, to leverage the investment potential from the freight corridor, from the refinery, to leverage the presence of country-specific zone like the Japanese zone, etc.” Also, RIICO has been involved in business promotions within the country and abroad as well, he added.

Talking on the impact of COVID on the industrial capacity and investments, Mr Pednekar stated, “The industrial capacity is not anywhere near normal due to COVID so we first need to get that to normal. Further, we have prepared ourselves for the Aatma Nirbhar Bharat package and we also have set up our own package to ensure that the existing industries stay.” There has been a lot of labour displacement seen during the lockdown period. However, Rajasthan is a big exporter of the labour but the Rajasthani labour which has returned from various parts of the nation has been taken care of, he told.

Adding on the labour aspect, Mr Pednekar said, “We are also leveraging IT for preparing a database of all the Rajasthani labourers and trying our best possible to indulge them in works within the state.”

On a concluding note, as far new investments are concerned, he said, “There will be new trends that are setting up. We have engaged with the European Union and their business groups, also from the US, Korea, Singapore and the traditional investors in Rajasthan from Japan. We are also seeing results from this approach which is a good omen.”