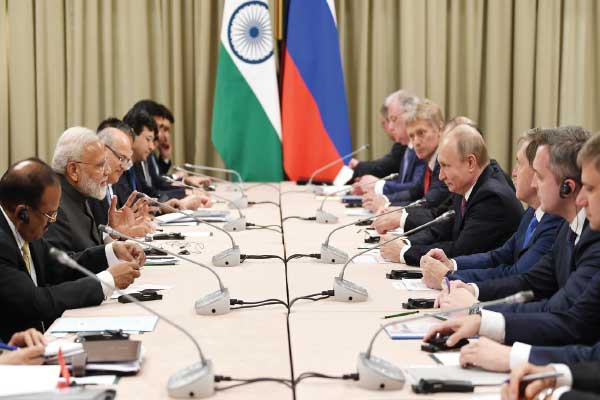 Whether it’s a friendship between two people or two nations, the basic tenets shaping this special relationship remain the same- mutual trust and deep respect for each other’s strengths and weaknesses. Going by this understanding, India-Russia relationship has all these virtues, and more. It is a relationship that has remained constant in a world that has been changing dramatically fast, and this feeling is deeply ingrained in the minds of people of both the countries.

Over the years, India and Russia have undergone tremendous transformation in terms of their socio-economic structure and level of development. However, both countries share some common challenges on account of being multicultural, multilingual and multireligious societies. The leadership of both the countries have, therefore, identified a common path based on the ideals of cooperation, transparency and tolerance to grow together. To ensure their rightful place in today’s geopolitical scenario, both India and Russia have voiced their support for a multi-polar world order for which strategic partnerships are set to play a pivotal role.

To tip the scale in favor of multi-polar world order, deep cooperation on bilateral level by emerging powers is going to be the key. It would help them to attain strategic parity with the developed world and maintain a favourable balance of power to protect their interests. It is in this regard that closer economic cooperation between India and Russia would set the stage for other emerging powers to set aside their differences and make serious efforts to closely integrate their economies and create a new world order that is favorable to them in achieving their national development goals.

The Eastern Economic Forum to be held in Vladivostok, Russia, therefore, assumes immense significance for Eurasian economies in terms of providing them an opportunity to develop a common development agenda by further strengthening their historial cultural, trade and business linkages.

This special issue of Egov magazine, being brought out in association with the Eurasia Division, Ministry of External Affairs, Government of India, celebrates the time-tested partnership between India and Russia through insightful articles written by subject experts. I hope the issue will give our readers a fair perspective on the forces shaping the special relationship between the two countries and help them understand the huge potential of the two emerging powers to reshape the world together.