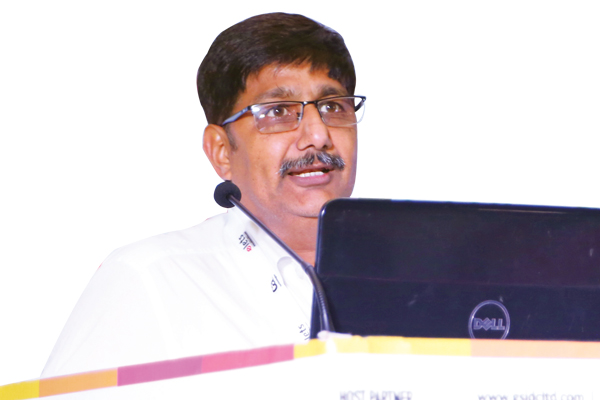 There is presently no system of testing drivers’ skill before issuing them a license. Many a times the licensing agency doesn’t know about the driver’s skill level. The driver’s fault is a major cause of road accidents in India. We should focus on improving driver’s skill, says Arun Dev Gautam, Transport & Home Secretary, Government of Chhattisgarh, in conversation with Gopi Krishna Arora of Elets News Network (ENN).

“Strict enforcement is needed. It should be like that not even a single driver dares taking his vehicle out on the road in a drunk state. Drunken driving is like a death machine running on the road.”

Road safety has become a challenge to public life. What initiatives the State of Chhattisgarh is coming up with to curb road accidents?

Road safety has become a major concern. The transport sector has to be modernised as cities are getting smarter day-by-day. The fatalities on the roads are rising. Statistics say the number of deaths due to road accidents has risen to almost 1.25 lakh while 5.25 lakh injury cases were recorded.

The challenge of road safety has been taken up by all concerned organisations on a war-footing. Even the UN has expressed its concern over the road safety issue in India.

The Ministry of Road Transport, Government of India, is putting all efforts to reduce road fatalities. The Supreme Court ordered committee is working in this direction. The committee is reviewing the strategies, action plan and all kinds of institutional infrastructure available in the State.

Road safety initiatives involve many departments. At times, lack of coordination among various departments makes road safety a very difficult task. What is your take on it?

The road safety is multi-agency affair. From road development to rules implementation process, so many agencies are involved in it which makes whole process little cumbersome.

However, the Supreme Court’s order makes whole phenomena of road safety an easy and controlled task. The order says that every State will have a lead agency. The concept of lead agency takes care of multi agency obstacle of road safety. In this lead agency, one person may be from transport or police department, who will be the chief. There will be subordinates under him from various departments like PWD, National Highway, health, education, and transport. This lead agency will be basically responsible for analysing the data of road accidents, black spots and major causes of it. It also monitors the action plan on road safety which every state compulsorily formulates to reduce road accidents.

When we talk about road safety initiatives, there is lot of scope in the engineering work in terms of improvement as it’s a big challenge in India today. What road is lying ahead in this light?

The big concern is they are building a national highway which is a very long and old road. In addition, there is a ribbon development on the roadside. People are found living on the roadside.

These things reduce the speed of highway and are becoming a big threat to road safety. Apart from highways, other roads are being built under PMGSY (Pradhan Mantri Gram Sadak Yojana) and state’s PWDs.

All these roads till now have not been very sound from design aspect. Road signage, road design, speed calming measures all these things are not present on these roads.

Training of drivers is a major concern for road safety, how training providers can play key role on this front?

India has not been very advanced country in the field of drivers training. There is no organised system for it. There is no school which provides them certification or proper training.

The national policy on driving has been considered to create a drivers’ training school in every State. It is in very advance stage of implementation. That school will cater at least the testing part of it. Before granting licenses, their driving quality will be checked. The effort will be made to ensure driving must be tested authentically.

There is presently no system of testing drivers’ skill before issuing them a license. Many a times the licensing agency doesn’t know about the driver’s skill level. The driver’s fault is a major cause of road accidents in India. We should focus on improving driver’s skill. At the same time, some attitudinal training is also needed.

What is your take on sustainable and environment-friendly mobility in the State?

Vehicular pollution is becoming a big problem in the cities. The courts and particularly Green Tribunals all have expressed concern on it. The Green Tribunals are very strict on enforcement of emission norms. Every small State, small township is provided pollution checking facilities. On the basis of that we are enforcing emission standards as well as BS3, BS4 norms. Apart from these, if some vehicles are violating emission norms, they are dealt with iron hand. The age of the vehicle, particularly of the commercial vehicles, has also been fixed. Old vehicles are phased out to contain the menace of pollution.

Do you think the electric vehicles could be the future?

Any non-polluting, alternative energy source vehicles could be the alternative. It should be like CNG which is very clean energy source. If anything like that comes to the fore, it will be a future transport fuel.

Despite many steps by the Government drunk driving cases are up. What challenges are we facing? Do we require tough laws or existent laws need strict enforcement?

Strict enforcement is needed. It should be like that not even a single driver dares taking his vehicle out on the road in a drunk state. Drunken driving is like a death machine running on the road.

Apart from strictness of fine and punishment, the certainty of getting caught is also one of the major things which can reduce drunken driving cases.

In addition, police on the road should be checking the drunk condition of a driver. They should be well equipped. There should be sufficient staff and sufficient places where it can be checked for drunken driving.

Recently, the Supreme Court took a very good initiative directing all the shops, bars and all to move to the 500 meters away from the highway. It reduced the drunken driving cases. As far as enforcement and putting punishment on these people are concerned; much more needs to be done in this direction.

Do you think some awareness or behavioral campaign during student life can help in the long run?

People of all ages need to be taught about the road safety. Whether someone walks as a pedestrian, rides bicycle, drives a commercial vehicle or travels in a bus, everyone should be aware about the road safety precautionary measures. These kinds of efforts have already been started. Chapters on road safety have been included right from primary classes onwards. Orientation towards good behaviour on the roads must be done. Audio-visual mediums and the direct briefing by the traffic policemen when someone violates the traffic rules help a lot. Counselling is also required.