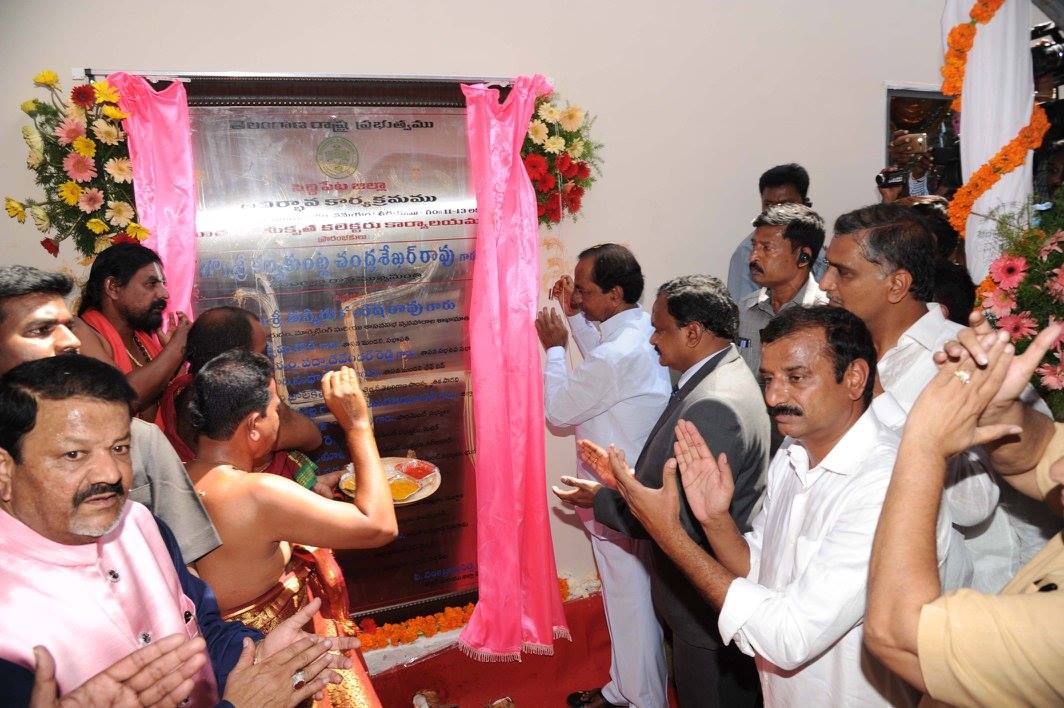 Hyderabad: The youngest and 29th state of India, Telangana reorganized 21 new districts within its territory on the auspicious occasion of Vijaya Dashami festival here on Tuesday.
The new districts formation, which was one of Telangana Rashtra Samithi’s (ruling political party) 2014 electoral promises, came into existence with the Telangana Chief Minister K. Chandrashekar Rao formally inaugurating one of the new districts Siddipet in Siddipet town at the Ambedkar Bhavan at 11.13 am (Dhanur Laganam).
Reorganization of 21 new districts that took the total to 31, has been formed for better administration, said the Chief Minister KCR, who spearheaded the Telangana Statehood movement resulting in the formation of new state on June 2, 2014.
“Formation of new districts is a historic occasion in India and an important step to transform our state into Bangaru Telangana (meaning Golden Telangana state). It is to end the feudal system,” said KCR while addressing the mammoth crowd that gathered at the center after huge procession from the newly inaugurated Siddipet Collectorate building.
Chief Minister’s son and Informational Technology and Municipal Administration Minister, KT Rama Rao, inaugurated Siricilla district which is his constituency.
Deputy Chief Minister and Education Minister Kadiyam Srihari inaugurated the Rural Warangal district. Similarly, the ministers of respective constituencies brought the newly formed districts into operation by opening the collectorate offices.
Each new district has one collector, one superintendent of police and other government office appointed for governance. However, Siddipet district, which happens to be the birthplace of KCR also got one new Police Commissionrate administration in addition.
In response to the plea of Siddipet constituency member and Irrigation Minister T. Harish Rao at the procession, KCR assured to establish a government hospital and educational university in the Siddipet district.
Also, a new railway facility is being established in Siddipet that was inaugurated by the Prime Minister Narendra Modi recently.
Over 6,000 women welcomed Mr Rao with arathi at Siddipet town. About 30,000 laddus were distributed and 50,000 balloons released on the occasion in Siddipet.
New districts have been carved out after 38 years, the last being Ranga Reddy district in 1978.
The new districts are Siddipet, Jangaon, Jayashankar, Jagtial, Warangal (Rural), Yadadri, Peddapally, Kamareddy, Medak, Mancheriyal, Vikarabad, Rajanna, Asifabad, Suryapet, Kothagudem, Nirmal, Wanaparthy, Nagarkurnool, Mahabubabad, Jogulamba and Medchal/Malkajgiri.