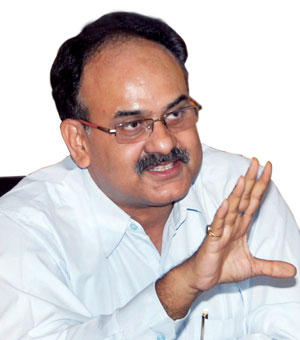 Identity crisis still haunts people in various parts of India and prevents them from availing even the fundamental services, but eKYC will change all that, says Ajay Bhushan Pandey in an interview with Kartik Sharma of ENN

Tell us about the UID initiative in Maharashtra.
Maharashtra has a large population of 11 crores, out of which, approximately 9 crores has enrolled itself for UID. Not only this we are onto the next phase which is application of UID in the system of governance, to make processing efficient for both the government and citizens, so that it’s a win-win situation for both.

With the UID, the government built a robust eKYC system which is rolled out to various states government departments; as a result when a resident walks in a government office, he does not carry any document or proof of identity with him. All he has to give is his fingerprint or the iris and the UID no. for identification, and the identity is confirmed or declined based on the details with the authority. The best part is that it can be done on the mobile devices which have android operating system, making the services easy to deliver and to use.

The government has also started to link the various beneficiaries database like scholarship, pension, etc with the Aadhaar numbers. The advantage gained by the citizen is of identity proof, as they would not need to carry identity documents. The other advantage is of eliminating the fake beneficiaries.

We have advised various state governments and central government to link the beneficiary database with the Aadhaar’s. For that to happen they’ll have to contact the beneficiaries and take their UID numbers and simply merge it with their databases. Through this, a list of those having UID numbers and those who do not have, will emerge. After this the concerned department will contact the concerned people to be enrolled for Aadhaar. All this will help the government identify that whether the person existing is real or otherwise.

What challenges did you face in implementing the UID initiative in a populous city like Mumbai?
There were many challenges owing to a large population like that of Mumbai, but luckily to counter that we have enrolment agencies and a much standardised system for data capture. It is an open platform and is not tied to any vendor as such. In turn, it was relatively easy for the enrolment agencies to procure the machines like an iris scanner, a fingerprint device, a laptop and a printer.

The people operating the machines were also certified and are well-aware of their operation techniques, which is why we had a drop in the error rate to less than one percent, considering that we had 65 crore employees and as many machines to do the job of data capturing. We also had to work very closely with the registrars who in turn gave their help and scaled up the operation.

The other government departments like those of LPG and Ration card requested the people to get Aadhaar and the people in turn felt the need, hence, the demand for Aadhaar, drastically increased. To take those demands head-on, we were well equipped and matched the ratio, so that is how we were able to take up such a mass exercise.

“One reason preventing people from accessing banks is not having a proper proof of identity. So, Aadhaar cards can be very important for  those who are not included in the system…it is easily accepted by any financial institution”

Cloud and Aadhaar are massive data holds. What initiatives have been taken for their security?
When we mention cloud it automatically evokes a sense of superior security; and data is available on this platform, because it is secure. Talking about the security of our data, it is secure and only accessible through our secure partner.

For an instance, KSAs which are few in number are the ones who have access to our data center infrastructure. Our core data center is not open in the Internet and we have several layers of security firewalls. So far owing to our vigilance we haven’t had any major issues, but that doesn’t mean that we are lax with our arrangements, we still continue to be vigilant.

How is Aadhaar enabling expansion of financial inclusion?
Aadhaar can be very important for those people who are not included in the system. The one reason that has been preventing people from accessing banks is not having a proper proof of identity. Aadhaar cards are easily accepted by any financial institution. But now with the RBI setting up various committees like the Nachiket Mor Committee, which have dealt with the issue of use of Aadhaar in the banking system for various modes of e-payment, not only they can open a bank account but also do banking through various methods like mobile etc. All of this is possible through Aadhaar and the eKYC infrastructure.

What is your vision for UID in Maharashtra?
I would say that Aadhaar in Maharashtra has reached a level of saturation, and is one of the few states in the country which uses Aadhaar in every governance exercise. Through eKYC employee attendance is ensured – whether a doctor in a rural hospital or a primary school teacher-where incidents of complaints regarding to absence are high, now can be kept in check through the biometric attendance system.

And the use of UID can be of convenience to people as the government can get the work done efficiently and deliver the services faster, and the bogus benificiaries hopefully will become a thing of the past through this initiative.