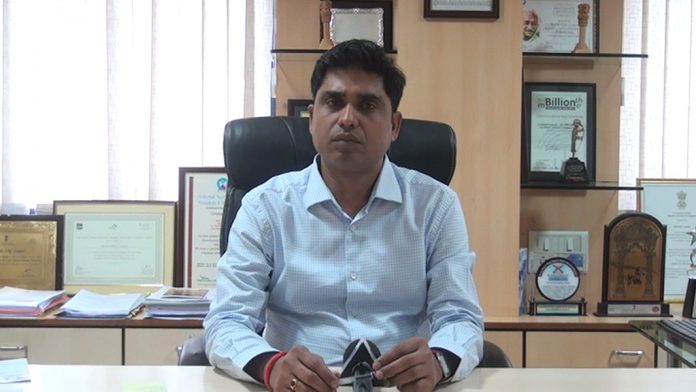 Credit availability and proper saving mechanism are very important for economic development of any country. In order to cater to the challenges of introducing such systems in rural areas and tribal extensions, the Tribal Development Department and District Administration decided to go in for a “Technology based Financial Inclusion Project”.

The initiative has been started under Tribal Development Department, Government of Gujarat, through the Development Support Agency of Gujarat (D-SAG) in association with District Collector & Dena Bank in two ITDP blocks of Sabarkantha district viz. Khedbrahma and Vijaynagar. The project is funded under Article 275(1) of the Constitution of India, which is meant for development of Infrastructure in remote tribal areas.

Sabarkantha is a district in Northeast of Gujarat with its administrative headquarters at Himmatnagar. Sabarkantha constitutes of 13 blocks, out of which 4 are identified as “Tribal Blocks” under Integrated Tribal Development Programme (ITDP) namely Khedbrahma, Vijaynagar, Bhiloda and Meghraj. It is one of the six districts in Gujarat currently receiving Backward Regions Grant Fund. (BRGF). Tribal areas are basically characterised by hilly terrain, rocky soil, uncertain rainfall and presence of large tracts of forest land. Tribal villages constitute of multiple faliyas (hamlets) which are scattered and isolated owing to their restrictive locations and lack even the basic amenities like approach roads, electricity, secondary schools, banking services etc. Tribal people have low incomes which are seasonal in nature and small money saved is kept idle in their homes.
Gujarat is one of the few states to have the Pilot Electronic Fund Management System (E-FMS). Vijaynagar block is the pilot block of Gujarat to implement the system for disbursal of MGNREGA wages. It has achieved 100 percent linkages to bank accounts.

Background of the Initiative
Due to the unavailability of a proper banking system, the cash was disbursed through postal services and this often resulted in 10-15 days delay in cash transfer. It involved a human interface, and lacked transparency and was liable to corruption. The tribal people needed a financial system that could offer low transaction costs, convenient operating time, minimum paper work, frequent deposits, and quick and easy access to credit and other products, in order to offering security of deposits.

However, existing banking services are limited to block headquarters as functioning in distant tribal pockets involve high operating costs, low deposits, low recovery and high security risks. Thus, tribal people have to travel at least 10-60 km to avail these facilities at the cost of a day’s wage. This time and cost factors make it difficult for the tribal population to make effective usage of banking services.

The biggest challenge for the initiative is the high rate of illiteracy which prevents Tribal’s from using the ATM Cards. They are susceptible to cheating by other people. In order to tackle this problem of illiteracy, a massive drive has been undertaken by the District Primary Education Officer wherein its “preraks” raise financial literacy and teach basic reading and writing skills to the iliterate to make them aware of the use of ATMs and its utilities.

Realizing the complexity involved in the implementation of such a gargantuan task, the initiative was taken to develop a holistic model which not only meets the expectations of tribal people but also addresses the concerns of the banks. The aim is to achieve a “win-win” situation wherein every stakeholder (implementing bank, TDD and related state departments and beneficiaries) can work in close coordination for developing an efficient credit delivery mechanism in these areas.

Start of the Project
Shri A.M.Tiwari, the then Principal Secretary, TDD and VC, D-SAG, realized the limitations of the existing system of cash transfer to the beneficiaries under various government schemes as well as the expectation mismatch between low income groups who are considered as non-bankable and the service providers i.e. the banks. Hence “Technology Based Financial Inclusion Project” was implemented under Van Bandhu Kalyan Yojana.

The 1st phase of the initiative is rolled out in Khedbrahma and Vijaynagar blocks of FATM Sabarkantha district. The MoU with Dena Bank was signed on 22nd February, 2011. First ATM machine was installed in Poshina village on 6th April, 2011. The formal inauguration of the project was conducted on 12th September, 2011 by Hon. Minister of State Jaswant Singh Bhabhor in Agiya village of Khedbrahma block.

In First Phase, 6,50,000 accounts were opened and the Passbooks along with Debit cards were issued. Accounts of MNREGA beneficiaries were linked to Electronic Fund Management System for Online wages Transfer. In Second Phase, a technological platform was created for collection of biometrics of target beneficiaries and provision of Biometric enabled ATM Cards which make use of fingerprint authentication for cash withdrawal. Also, every government cash transfer schemes will be diverted to the beneficiaries account.

Conclusion
In this initiative, so far a total of 2,10,065 families are involved. More than 4,600 Debit cards under ATM Project has been given. More than 973 beneficiaries have utilized the overdraft facility in order to meet their Emergency requirements in case of medical emergency, consumption needs or seasonal shocks. Earlier people were travelling a day for banking transaction, thus losing a day wage as well as transportation costs. Now they can approach the nearest ATM Centre for any transaction.

Total number ATM hits is more than 28,973 and total cash withdrawn is more than 3 crore rupees. Earlier they were getting their MNREGA wages after 10-15 days through postal services but now they get their wages as soon as the wages are transferred to their respective accounts. Given the sheer volume of business in these areas shows that the initiative is viable without any external funding. This initiative shows how technology can be used to better the conditions of remotely located tribal people. The provision of banking made them not only included financially but also socially and economically.