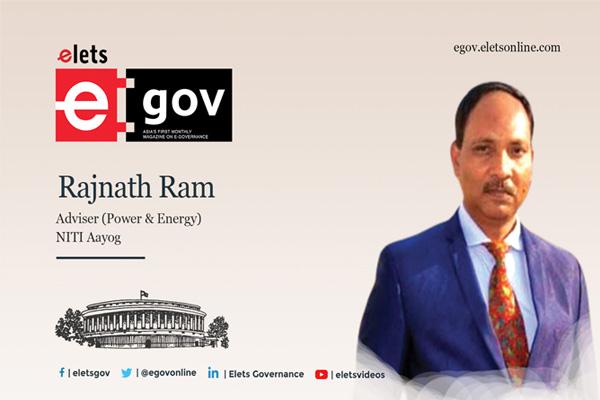 Since governance is an ecosystem, and innovations in this digital age are often a product of collaboration, NITI Aayog has robust partnerships with various institutions, thinktanks both from domestic and international and is catalysing transformational changes. Rajnath Ram, Adviser (Power & Energy), NITI Aayog in exclusive conversation with Nisha Samant of Elets News Network (ENN). Edited excerpts:

What measures are being taken by the Government including NITIAayog for the development of Power & Energy in the rural sphere?

NITI Aayog is not to be considered as a separate institution from the Government Ministries and Departments. NITI Aayog since its inception has provided all necessary support in policy formulation to the Ministries and reviews various programs and policies being implemented by the ministries. It has played a major role in various policy formulations and transformational policy initiatives to provide all desired support to Ministries. However, one may like to note that the economic growth in India is among the highest in the world lifting millions of people out of poverty. According to the SDG Global Index 2022, India is on track for achievements for SDG12 (Responsible Consumption and Production) and SDG 13 (Climate Action). A substantial growth has also been achieved under SDG7 (Affordable and Clean Energy). India’s cumulative score in the SDG Global Index has constantly improved except during pandemic period standing at 60.3 in 2022. The Government of India has launched transformational schemes to improve the access to modern energy services. These include:

Pradhan Mantri Sahaj Bijli Ghar Yojana (Saubhagya) is a scheme launched by Government of India in October, 2017 with an objective to achieve universal household electrification by providing electricity connections to all unelectrified households in rural areas and all poor households in urban areas in the country. Since the launch of the scheme, 99.9% households have access to electricity.

Pradhan Mantri Ujjwala Yojana (PMUY) is a scheme launched in 2016 with an objective to make clean cooking fuel such as LPG available to rural households who were otherwise dependent on traditional cooking fuels such as firewood, charcoal, cow-dung cakes etc. The release of 9.55 crore LPG connections under the scheme helped in increasing the clean cooking access to rural households in a big way. Government is now considering saturation of the scheme and increasing access to LPG to all the households. India has become a global role model for the world. The success story of India in the energy space is unparalleled in ensuring energy access, and energy justice while achieving climate change and women empowerment goals.

Unnat Jyoti by Affordable LED for All (UJALA) is a scheme launched in 2015 with an objective to provide energy efficient LED bulbs to domestic consumers at an affordable price. The programme was successful in bringing down the retail price of the LED bulbs drastically from Rs. 300- 350 per LED bulb in the year 2014 to Rs 70-80 per bulb, in a short span of 3 years. As of November 2022, more than 36.86 crore LEDs have been distributed across the country and resulted in annual energy saving of 47,880 Million kWh, avoidance of 9,586 MW of peak demand along-with 3.87crore tonnes of reduction in CO2 emissions (The above figures are based on the National UJALA Dashboard).

Pradhan Mantri Kisan Urja Suraksha evam Utthan Mahabhiyan (PM-KUSUM) Scheme – this is a scheme launched in 2019 with an objective to provide clean energy to the farm sector. Three major components under the scheme include:

Under the existing Cooperative and Competitive federalism, NITI Aayog is working with various state governments and shaping various reforms pertaining to different sectors. Discussions are organised with the states under the Cooperative Federalism, where chief ministers/LGs are the members of the Governing Council headed by Hon’ble Prime Minister. The concerns raised by the States are taken care of during the Governing Council meetings. Separately, issues related to Grid integration in higher Renewable Energy Scenarios, long term planning and developing the energy planning tool for the states and other miscellaneous issues from time to time are resolved by NITI Aayog through separate interactions with them. For six states we have supported the development of the energy planning tool.

What are your plans to ‘light up’ (provide electricity) the interiors and rural parts of India?

In the areas where it is difficult to extend transmission lines, the option of decentralised renewable energy systems such as Rooftop solar plants and mini/micro-grids are being promoted which have minimal T&D losses as most energy is consumed near the source.

The Government of India is implementing the RoofTop Solar (RTS) Programme under which the government is providing 40% subsidy for households to install solar projects up-to 3 kW, and up to 20% for projects of 3 kW and up to 10 kW. Till Nov 2022, over 6.4 GW of rooftop solar has been installed in the country. Ministry of New and Renewable Energy has recently launched Pan-India rooftop solar awareness scheme Mini/Micro-grids are also sustainable and potentially cost-effective solutions to advance electricity access in areas where the cost of expanding the grid exceeds the revenue potential for discoms, such as in remote rural areas. Till date, there are substantial micro and mini-grids operating in India, however, there is no official data on this. MNRE has a program on decentralised renewable energy which includes street lighting, solar lanterns and solar cooking, etc.

You were leading the initiative of Energy Data Management to create a robust energy data management system of international repute. How did you manage to set up an Energy Modelling Unit within the NITI Aayog?

NITI Aayog is following a comprehensive approach to entrench data driven policy formulation within the governance ecosystem. We understand and recognise the limitless potential that anchoring of policies in empirical and statistical frameworks opens up. Recognising this need for data-driven decision making, NITI Aayog has taken several efforts in moving towards the creation of a one-stop platform for energy data in the country. The building blocks of this one-stop platform include:

Since governance is an ecosystem, and innovations in this digital age are often a product of collaboration, NITI Aayog has robust partnerships with various institutions, think-tanks both from domestic and international.

When it comes to clean fuel and solar, the solar rooftop market hasn’t performed as well as projected. We’re missing the mark there. What do you think the reasons could be behind this?

What factors have influenced the renewable sector’s growing importance in bridging India’s energy gap? How has renewable power contributed to this mission?

There are four major drivers that have contributed to growing the importance of RE in bridging India’s energy gap: i) Economic development ii) Improving energy security iii) Improving access to energy and iv) Mitigating climate change.

The Hon’ble prime minister of the country has laid down the clean energy transition roadmap with the announcement of ambitious climate commitments (Panchamrit Pledge) at COP-26 that are further reflected in India’s updated NDC. Quantitative commitments under NDC include: i) To achieve about 50 percent cumulative electric power installed capacity from non-fossil fuel-based energy resources by 2030 ii) To reduce Emissions Intensity of its GDP by 45 percent by 2030, from 2005 level iii) To create an additional carbon sink of 2.5 to 3 billion tonnes of CO2 equivalent through additional forest and tree cover by 2030.

Government of India has undertaken several reforms for set-up of enabling RE ecosystem which included: 100% FDI permitted under the automatic route, standardised bidding guidelines, developing green corridors for RE evacuation, creating new demand for green energy, and declaring an increasing Renewable Purchase Obligations (RPO) trajectory, Production Linked Incentive (PLI) scheme for manufacturing of high efficiency solar cells and modules and PLI scheme for Advanced Chemistry Cell would enable country to increase the manufacturing base in India. Because of such developments, India will take centre stage for RE and clean energy development in the world. With an enabling ecosystem for RE, India today stands at number four in the world in terms of total RE installed renewable capacity after China, US and Germany. India ranks third in renewable energy country attractiveness index among the 40 major economies.

India currently has achieved 42 per cent total non-fossil based installed capacity by October 2022. Also, the country’s emission intensity has reduced by 28 per cent as of 2022 compared to 2005 level.

It also needs to be highlighted that energy demand will be growing at the rate of 4-5 per cent in the coming years and it is expected to be doubled by 2040. All the incremental demand is likely to be met through more penetration of Renewable and clean energy thereby reducing the share of fossil based energy sources.