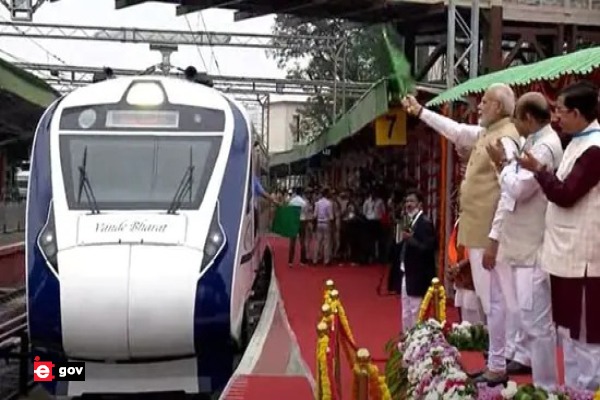 Prime Minister Narendra Modi, who is on a two-day journey of southern states, flagged off India’s fifth and South’s first Vande Bharat train from Bengaluru today. The train is scheduled to run between Mysuru and Chennai and will also lessen the travel time between the two destinations.

“It will enhance connectivity between the industrial hub of Chennai and the Tech and Startup hub of Bengaluru and the famous tourist city of Mysuru,” the PMO said. The train was inaugurated at KSR Bengaluru station and will reach Chennai later.

Prime Minister Modi also inaugurated the Bharat Gaurav Kashi Darshan train under the ‘Bharat Gaurav’ train policy of Railways. South Western Railway in its statement said that It will fulfil the dream of numerous travellers intending to undertake Kashi Yatra.

1) Fare for car chair and executive class to travel between Chennai to Mysore has been kept at ₹1,200 and ₹ 2,295 respectively. And for travelling from Mysore to Chennai, the fare charge will be ₹1,365 and ₹2,486 respectively.

2) Covering 500 km in 6 hours 30 minutes, the train is scheduled to halt at two stops between Chennai and Mysore- Katpadi and Bengaluru, officials said. The inception of train operation will begin on Saturday.

3) According to some railway experts, the train has the capacity to reach Chennai from Bengaluru and vice-Versa in just three hours.

4) The train has been developed by Integral Coach Factory (ICF), Chennai, and enabled with an intelligent braking system for better acceleration and deceleration.

5) All the coaches are equipped with automatic doors, GPS-based audio-visual passenger information system, onboard hotspot Wi-Fi for entertainment purposes, and comfortable seats.

6) The first Vande Bharat Express train was flagged off on February 15, 2019, on the New Delhi-Kanpur-Allahabad-Varanasi route.