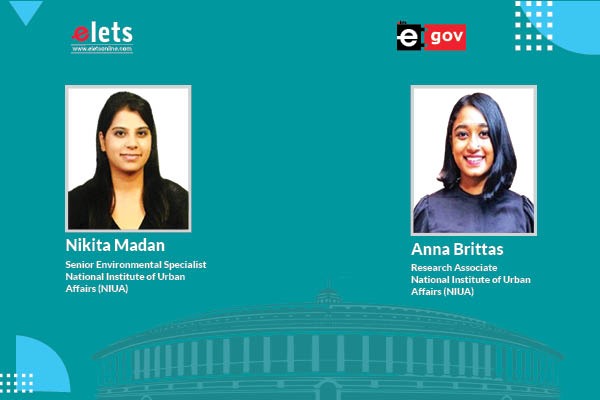 SDG 6.1 focuses on the accessibility, availability, quality and affordability of drinking water supply to all households. In this article, Nikita Madan, Senior Environmental Specialist, National Institute of Urban Affairs (NIUA) and Anna Brittas, Research Associate, NIUA, bring to light the efforts of the Government of Odisha on making safe drinking water available through taps.

Puri is a coastal town in the eastern part of Odisha, located at a distance of 65
km from the state capital Bhubaneswar and on the coast of the Bay of Bengal. It is one of the most famous religious tourist places in India. The temple town of Puri is now the first town in India where all the residents are receiving 24-hour quality drinking water directly from the tap. This means that in Puri, one can open the taps anytime and get safe drinking water. There is no need to store or filter water anymore.

The Journey of the ‘Drink from Tap’ Scheme in Odisha

Way back in 2015, the Government of Odisha observed that the water distribution system in the state faced significant challenges such as erratic supply, inequity in supply, inconsistent pressure, and contamination due to the mixing of water and sewage lines. All of this led to enormous public dissatisfaction. At that time, only 50 per cent of the households in Puri had piped water connections. The rest of the households had to rely on public stand posts, water tankers or other sources of water. The slum communities largely depended on community hand pumps and other sources, costing them a lot of time and effort in the process. Moreover, due to a lack of adequate infrastructure and metering, around 54 per cent of unaccounted water losses were observed within the system. Puri being a coastal town is also prone to cyclones, causing frequent disruption to the water supply service. Poor service coverage, poor water quality, intermittent supply and high-water losses were the predominant water supply challenges that required to be addressed.

In 2017, there was a state-wide move to upgrade the water supply infrastructure for achieving universal coverage of piped networks and transition from intermittent supply to 24×7 water supply. Between 2017 to 2020, a five-fold increase in investment in the water sector facilitated this transition, with 6000 km of new pipe network added to the existing infrastructure.

In 2020, after achieving universal coverage and 24×7 water supply across the state, the Government of Odisha moved into higher orbits in the water supply scenario, with the Mission ‘Drink from Tap’ (DFT), also called the ‘Sujal’ Scheme. The scheme aimed at providing drinking quality water, round the clock, to every household, even in the sizable slum population. Pilot testing of eight schemes in Bhubaneswar and four schemes in Puri further helped in refining the mission. In July 2021, Puri became the first city in India to provide ‘drink from tap’ quality water round the clock to all its citizens.

Under the DFT scheme, the government draws water from the Bhargavi river flowing near the town. The water is then channelised to a reservoir and then sent to a treatment plant at Samang. There, it goes through several treatment processes, before being sent through a network of pipes to the Elevated Storage Reservoirs in each ward, for further distribution to the households.

This mission is unique on several grounds, such as:
● Provision of IS 10500 Quality Drinking Water to every home, that can be used directly for drinking and cooking purposes without any further need for filtration/boiling/treatment.
● Equitable distribution of water supply with a focus on economically weaker sections/ marginalised communities, by providing taps in each slum household.
● Quality assurance by continuous testing and monitoring in state and divisional level laboratories established on PPP mode, mobile van laboratories deployed for on-the- spot quality testing, and portable field testing kits for checking the household water samples. Sensor- based ‘Automatic Chlorine Dosing System’ helps in maintaining the appropriate chlorine level to ensure drinking water quality.
● Implementation of IoT driven ‘Smart Water Management System’, for real-time operation & management of the system, by means of data capture, analysis, decision making and public reporting. This is a one-of-its-kind city-wide deployment of an industrial IoT solution, in the water supply sector in India.
● Enhancing community partnership by involving local women’s self-help groups such as ‘Jal Sathis’, to connect with consumers. They are primarily responsible for facilitating new connections, reading water meters, generating water bills and collecting user charges, sensitising people on water conservation, supporting consumer complaint redressal and household water quality testing.
● Generating public awareness by installing real-time digital display of water quality information in strategic locations, and running a strong IEC campaign called ‘Pure for Sure’.
● Reducing the non-revenue water by metering each individual household connection. The new fixtures and fittings installed also reduce the chances of leakage.
● Conducive policy measures and a hassle-free process for procuring water connections helped in strengthening the community support for the scheme. The implementation by the Water Corporation of Odisha (WATCO) eased the process by treating the household connections as public work, which is served by the agency.
● Building capacities of the technical staff. All the installation and maintenance works are undertaken by plumbers who are trained, certified and empanelled.
● Efficient complaint redressal system with an IVRS based Centralised Customer Care Centre for complaint logging, and deployment of quick response teams for immediate maintenance.
● GIS-based mapping of all the assets and consumers.
● Installation of water fountains at prominent public locations, to minimise the use of plastic bottles and reduce the waste generated in the city.
● Elimination of household investments in private overhead water tanks or underground reservoirs, motor pumps, and RO-based water filters.

While the discourse on 24×7 or round- the-clock water supply has been ongoing in India for quite some time, ULBs and Water Utilities have not been able to adopt many scalable initiatives to date. The lessons learned from Puri’s journey can serve as a useful reference for other cities. Several technical challenges were faced, such as plugging information gaps related to existing infrastructural provisions and consumer databases, ensuring a steady source of water supply, overcoming frequent power outages and reducing the existing physical losses.

Another vital challenge was to convince the public to get connected to the water supply system because most households had private borewells. Even after getting DFT connections, a fraction of the residents were sceptical about the quality of the water supply. The special features of this scheme steadily answered a majority of the challenges faced in its implementation. In addition, further improvements are still being made for a smooth complete transition into the new system.

The DFT Mission is further planned to be upscaled, covering each household in all the 114 Urban Local Bodies (ULBs) of the State in a phased manner.

Role of DFT in supporting Odisha to make a mark on SDG 6.1

While the eight global targets of SDG 6 are universally applicable, it is up to the Centre and State governments to decide how they can be incorporated into
state-level policies and strategies. The Government of Odisha sets a precedent by envisioning and implementing the DFT mission, keeping in mind its regional context and capacities.

The Drink from Tap Scheme has indisputably supported Odisha to make a mark on SDG 6.1. As per the United Nations and NITI Aayog, SDG India – Index and Dashboard1, Odisha’s performance against SDG 6 has improved from a score of 46 in 2018 to 85 in 2019, and further to 86 in 2020 (scores are out of 100). A visible sign of this advancement is the improved source of drinking water supplied to the households.

Achieving SDG 6, specifically target 6.1 also means supplying water even to those who lack the basic services. By prioritising the urban poor, this mission honours a key tenet of ‘equitable’ access to water. It has also been instrumental in saving the time spent by women earlier in collecting water which serves as a key driver in achieving gender parity. It is envisaged that the state will further improve its performance of the SDG 6 Indicator, once the scheme is upscaled in other cities.