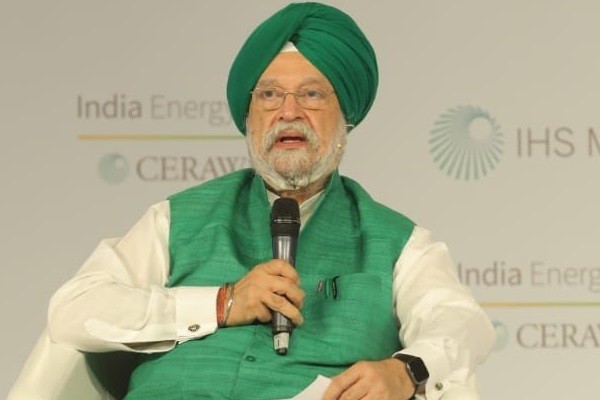 “Access to energy must be affordable and reliable”, said Minister of Petroleum & Natural Gas and Housing & Urban Affairs Hardeep Singh Puri while addressing the 5th India Energy Forum by CERAWeek at New Delhi, on October 20. The Minister deliberated that the global economy needs Clean, Affordable, Reliable, and Sustainable energy to speed up the post-pandemic recovery. People need to accept People need to accept the reality that the world has to be a reliable supply of oil and gas until we can build new energy infrastructure.

The current levels of oil and gas prices are soaring. India is 85 per cent dependent on imported oil while the import dependence is about 55 per cent for gas and 20 per cent of the country’s import bill is from these items, the Minister said. The import bill of the commodities has risen by nearly three folds in the past quarter in comparison with the last year’s corresponding quarter.

He said that the extreme volatility and high prices have led to the surge in the domestic prices of hydrocarbon fuels. The high prices of oil have impacted economies, leading to growing inflation and affecting the logistics cost.

Calling the scenario a “wakeup call”, the Minister said that if prices are not controlled, global economic recovery could be fragile. The prices have to be predictable, dependable and stable, he added. This may also impact the producers in the long run. Puri said that OPEC+ countries should factor in the sentiments of the consuming countries.

He said that India is accelerating its efforts to become a gas-based economy. He said that about $60 billion investment is underway in the country in setting up the infrastructure- pipelines, terminals, regasification facilities, and more. The country is on the path of “One Nation-One Grid”, with the Pipeline length going to increase from 19,000 km to 35,000 km. The area under exploration is also increasing, and the country has undertaken a plethora of reforms so that there is more investment in the E&P sector, the Minister added.

Speaking on biofuels, Puri said that ethanol-blending has already reached 10 per cent and we are determined to take it to 20 per cent soon. Under the SATAT scheme, 5000 CBG plants are being set up with an investment of $20 billion. Also, thousands of charging stations for electric vehicles (EVs) are being installed. Further, to usher in transition to the Green energy, Hydrogen Mission is being launched, said the Minister.

Describing India as a sui generis case, he said that with around 16 per cent of the world’s population, the per capita energy consumption in India is only one-third of the World. Our energy consumption is set to rise as we move towards a US$ 5 trillion economy by 2025. He said that energy justice for India is a key objective and priority for our government.

Adding on Puri highlighted that India comprises one-sixth of the global community and our commitment to the Sustainable Development Goals (SDGs) related to clean energy, urban development and health will ensure their success. Generally, for the SDGs to succeed, India must succeed. That is when socio-economic transformations can take place. We view the energy sector as one that empowers people and furthers “Ease of Living”, he said.

The Minister said that the Hon’ble Prime Minister Narendra Modi, in the previous year, envisioned seven key pillars of India’s energy strategy going forward. Collectively, these would help India move towards cleaner energy. The country is focusing on developing in an integrated manner a gas-based economy, cleaner use of fossil fuels, achieving the renewable energy target of 450 GW by 2030, greater reliance on domestic fuels to drive biofuels, increasing the contribution of electricity, moving into emerging fuels like Hydrogen and promoting digital innovation across all energy systems. The Minister added that we are moving towards a clean and green energy transition in a big way. India is unwavering in its commitment to climate action.

On the International energy best practice, he said that in the making of a New India, time tested best ideas have to be put to work. He said that our contracts are aligned with Good International Petroleum Industry Practices but he questioned whether these are sufficient or is there a gap that needs to be addressed with refreshed thinking and implementation.

The Minister said that the year’s theme at the Forum ‘Building India’s New Energy Future: Clean, Affordable, Reliable, Sustainable’ is well chosen because India’s energy transition has multiple dimensions and its energy sector is undergoing a transformation with a relentless focus on outcomes.