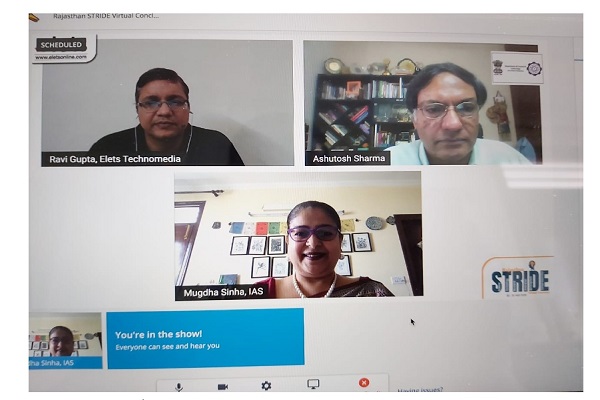 Experts shared tips for making ‘Atmanirbhar’ (self-reliant) India using science and technology during the inaugural session on May 30 of the two-day Rajasthan STRIDE virtual conclave organised by the Department of Science & Technology (DST), Government of Rajasthan in association with Elets Technomedia.

Mugdha Sinha, Secretary, DST, Government of Rajasthan said that it was first of its kind of virtual conclave. Explaining about the acronym STRIDE, she said S stands for Science, Society & Start-Ups; T for Technology, Transfer of Technology & Biotechnology; R for Research; I for Intellectual Property Rights, Industrial Design & Innovation; D for Design, Drones & Development and E for Engineering & Entrepreneurship.

Prof Sharma said India can become self-reliant with quality and being globally competitive and not by ‘jugaad’. He said science and technology will lead India towards making ‘Atmanirbhar’. He stressed on research and development, invention, innovation, prototype, start-up, market and industry will have to come together. He said, “India is not lagging behind in R&D as India is number three in the world in regard to publishing research papers in journals. The problem is that R&D is not going to the market.”

Highlighting youth in India as a strength of the nation, he said, India has to fuse energy (youth) with experience (older people) tap the optimum potential. The market is very big. The diversity is a big strength and as soon as we understand the fact and leverage our strength, the better it would be. He also talked about the importance of data. “We are living in the age of data and it is a precious commodity. Digital technology is worthless without data,” Prof Sharma added.

He further said, “Confidence is very important, without which most of the scientists become followers.” He said teachers and parents should see that children do not lose confidence. He also stressed on industry and academia work together. Technology and product should match the priority of people. Most of the science fails if not connected with society and humanity, he said.

She said preparedness of ecosystem gave an opportunity for solution for many problems. Many start-ups came up 15 days of pandemic and there were 500 solutions to expend help during the COVID-19 including tracking, testing kit etc. Testing kits initially was being imported, but now 30 lakh kits are being made per month and by June 100 percent indigenous kits will be made as per the requirement.

Dr Swarup too added that soon India will be ‘Atmanirbhar’ in each component. She said that start-ups became innovative instead of followers thus becoming sustainable. The world is looking at India as a manufacturing hub.

Dr Guruprasad Mohapatra, Secretary, Department for Promotion of Industry and Internal Trade (DIPIIT), Government of India spoke about the Start-Up policy. He informed that the Government of India is considering providing seed money and starting credit guarantee scheme to help those coming up with Start-Ups.

He said that many Start-Ups are making quality products at part with multinational companies, but they do not get the market to sell them. He suggested the state and centre should provide space in government outlets to promote them.

Dr Mohapatra said that the e-commerce companies are fast emerging and developing sector. They have moved from metros to tier-I and tier-II cities offering goods and services. He said, “To evolve a policy on e-commerce, work is on a draft which will be put on the public domain to take feedback and suggestions from people and then the policy will be announced.”