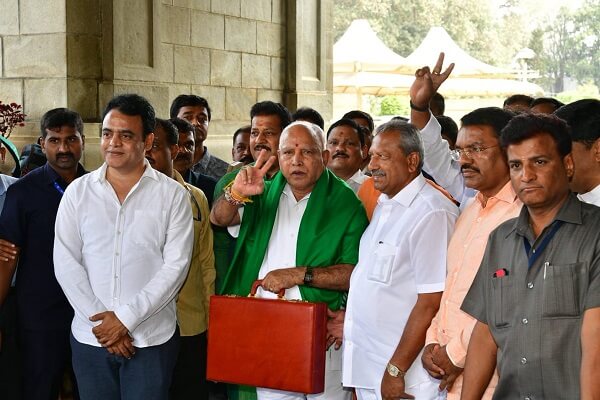 For various departments like Bruhat Bengaluru Mahanagara Palike (BBMP) and Bangalore Water Supply and Sewerage Board (BWSSB), the budget has a dedicated sum of over Rs 8,700 crore set aside.

The Chief Minister emphasised on the need for a Municipal Corporation Act, specifically designed for Bengaluru to address the nature of problems and issues ongoing in the city that pose a major challenge to the civic administration.

The ‘Mukyamantrigala Nava Nagaroththana‘ scheme which was launched in the previous fiscal as an action plan for different works at Rs 8,344 will be continued for this year as well as 2020-21. Moreover, for solid waste management works under the ‘Shubhra Bengaluru’ scheme at a grant of Rs 999 crore will be implemented this year.

As per a proposal for developing a ‘Waste to Energy’ plant at Bidadi and Ramanagara by the Karnataka Power Corporation Ltd. in association with BBMP having a capacity of 11.5 MW of energy, an estimated amount of Rs 210 crore has been kept.

Further for implementation of ‘Shubhra Bengaluru’ scheme to prevent sewage from entering lakes, a sum of Rs 100 crore has been decided, whereas, Rs 317 crore has been kept aside for the development of lakes under the ‘Mukhyamantrigala Nava Nagaroththana’ scheme. The budget allocation focusing on the development of water bodies have been made to conserve the natural ecosystem, greens of the city and preserve the local flora and fauna.

Also, the budget has kept a share of Rs 200 crore for repairing and filling up the missing gaps in the stormwater drain network in the city. Improving the drain system will help in avoiding floods during the rainy season.

Yediyurappa, during his speech talked about boosting the development of civic infrastructure and said that the construction of 56-km long Outer Ring Road – Airport Metro from Central Silk Board junction to Bengaluru International Airport via KR Puram and Hebbala at an estimated cost of Rs 14,500 crore will be taken up during this financial year.

Moreover, a comprehensive mobility action plan has been created for the first time to counter traffic congestion in Bengaluru. With an aim to increase the use of public transport from 48 percent to 73 percent, infrastructure facilities, transit-based development and essential regulatory measures will be taken up.

A few major junctions like Hebbala, Silk Road and KR Puram will see the implementation of corrective action as per the mobility plan developed to ease out traffic congestion. At an estimated cost of Rs 500 crore, around 190-km of roads will be developed under the supervision of Karnataka Road Development Corporation. These will come up under 12 high-density zones which contribute 80 percent of traffic congestion.

Due to a project by BWSSB to provide drinking water and develop underground drainage systems in 110 villages roads nearby have been deteriorated for which a total of Rs 1,000 crore has been earmarked for redevelopment of roads. Rs 500 crore will be released this out of the total sum.

The CM also discussed the TG Halli project saying that from the project, 1.7 TMC water can be utilised for the city. Further, he informed that the project will be completed by the end of September 2021, he said.