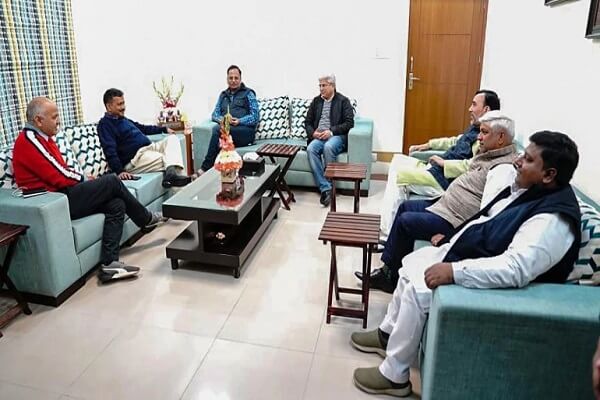 Arvind Kejriwal has been elected as the Chief Minister of the National Capital Delhi thrice in a row. The Aam Admi Party government has reshuffled a few departments among the elected ministers.

Chief Minister Arvind Kejriwal has not taken charge of any of the departments. As per the government sources, a majority of the responsibilities of the elected cabinet ministers will remain the same but some would change.

Below is the list of newly elected ministers and their respective departments in the Delhi Government.

Arvind Kejriwal, who contested the elections from New Delhi constituency, sworn in as the Chief Minister of the Union Territory on Sunday. He is also heading the Delhi Jal Board (DJB) as in his previous tenure.

Manish Sisodia continues to hold his position as the Deputy CM of the Union Territory. Along with being the number two, he is also the in-charge of 11 departments; a few of them are Education, Finance, Planning, land and building, vigilance services, and women and child development. Sisodia contested the elections from Patparganj constituency.

Satyendra Jain from Shakur Basti constituency takes the charge as the Health Minister. He has also been given the responsibility of the various other departments including industries, Public Works Department, Home and Urban Development.

Gopal Rai, who stood from Babarpur constituency, has been given the charge of rural development, General Administration Department, Irrigation, Flood Control, and Labour.

Kailash Gahalot has been appointed as the Minister of Transport for the second time. Gahlot, who contested the elections from Najafgarh has also been given charge of Revenue, Administrative Reforms, Information and Technology, Law, Justice and Legislative Affairs.

Imran Hussain, the representative from Ballimaran constituency has been given the charge of Environment and Forest Minister and will also be looking after Food and Supply Election.