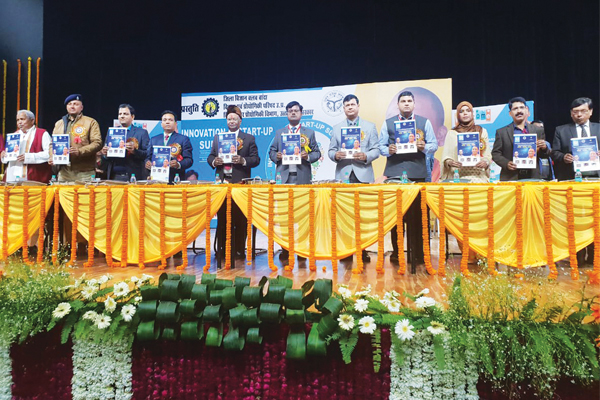 The wide scope of innovative solutions and technology for a range of challenges existing in Uttar Pradesh’s Banda district came to the fore recently during the Innovation and Start-up Summit 2019. Key officials from government and industry leaders discussed the existing problems threadbare and figured out possible solutions, writes Arpit Gupta of Elets News Network (ENN).

The summit, an endeavour to find out solution of key issues affecting general life and growth prospects in the district such as Anna Pratha, water scarcity and malnutrition, saw the District Administration of Banda and Zila Vigyan Club, Banda collectively finding out way out for farmers’ cause.

The endeavour was made during this three-day Innovation & Start-up Summit 2019 which witnessed an impressive and active participation of policymakers, innovators and general public alike. The deliberations held on the occasion explored ways to ensure sustainable development in the district.

Inaugurated by Prof Kripa Shankar, former Vice-Chancellor of AKTU, Lucknow, the summit provided a platform for innovators and start-ups to explore opportunities in Bundelkhand region. The areas pondered over included agriculture, healthcare, mobility, women safety, waste management, among others.

“Such innovations were done in ancient times also but due to regional and geographical situations and problems they became extinct,” said Kripa Shankar on the occasion.

The event also witnessed innovators exhibiting various special products and solutions. There were about 100 stalls of innovators from across the country and 80 stalls of different government departments.

These were visited by farmers, school students, trained and untrained people, along with citizens of Banda.

It was a big draw, as the event witnessed a total footfall of over 40,000 in three days.

The summit gave wings to the holistic development of Banda, once known as the most backward regions of Uttar Pradesh.

Active participation by different categories showcases the enthusiasm and zeal of creativity and innovation in natives of Banda. Enlightened youngsters with positive vibes to succeed as innovators in future. This summit abridged the gap between Government Officials/ Departments and General Public.

The summit comprised various sessions on key issues. Speakers from various states attended the sessions and shared their experiences and invaluable views.

Organised on the theme of ‘Let’s Innovate, Explore New Paths of Sustainable Development’, the Summit also deliberated on three major problems of Banda district — Anna Pratha, water crisis and malnutrition. “Anna Pratha” refers to a practice of farmers abandoning their cattle from the onset of summers till the next agriculture season.

Nearly a dozen bureaucrats including District Magistrates of Chitrakoot, Mahoba and Fatehpur, Superintendents of Mahoba, Fatehpur, Special Secretary (Revenue), Regional Passport Officer, Lucknow, also participated in the summit, with each one of them presiding over at least one session.

More than 125 innovators of the country presented their unique solutions for the problems facing the area. Some of such solutions were:

Electricity Saving Chair: Electric equipment connected to the chair automatically get on/off whenever anyone sits on the chair. The innovation was presented by Rahul Singh from Gorakhpur.

Manually Operated Washing Machine: Washing machine which could be operated by hand or by pedal was Presented by Shubham Gupta of Banda.

Energy Production from Garbage: Way to produce energy by utilising garbage. The ideas was presented by Arpit Singh Chauhan of Basti.

Divided into seven themes, there were 28 technical sessions organised to brainstorm over issues including:

Solutions for the major problems of Banda – Anna Pratha, Water Crisis and Malnutrition in addition to Urban and Rural Development, Health, Education, Agriculture etcetera were also deliberated upon during the sessions.

There were thorough discussions on Banda’s rich mineral wealth and how to make use of its limited use.

It was suggested that technology should be used to boost innovations in the district. Suggestions like making groups in the villages for taking care of animals to stop Anna Pratha, public awareness campaigns for traffic problems were also made.

There were discussions on how students could set up small scale industries while taking care of their academics, minimal use of pesticides for wheat were also done.

The district administration stressed upon the special programmes being run for start-ups.

District Magistrate Heera Lal also assured the innovators that the administration would provide all kind of help and technical assistance to them.

Also Read: Innovation and Startup Summit 2019 gets Underway at Banda

With more than 80 stalls, 60 featured various Government policies and departments. There were 20 stalls extensively showcasing various products of the industries. Of these 20, at least 10 were awarded by the district administration. The expo served as a bridge between the local public and various government departments.

I must congratulate Banda’s District Magistrate, Heera Lal for organising such a big summit in a place of limited means and resources. Youngsters here have presented out of the box ideas in the field of agriculture, horticulture, small sector, medical. This will serve as an inspiration for the entire district. Farmers will benefit from these ideas directly. The achievements of this summit are exemplary. I have been a witness to such summits in Lucknow as well but Banda has surpassed them also. Other IAS officers can get inspiration from here. This can also help with the generation of employment. I, as commissioner, will send a complete report to the State Government and will recommend for holding such summits in other parts of Uttar Pradesh.

More than 100 artistes from the Bundelkhand region displayed their talents and received a cheerful appreciation by the local public. Local problems were also highlighted through various means.

One of the cultural attractions at the event was a folk artists’ performance. There were eight stages in the premises of Medical College to showcase the local dance, music and magic shows.

On the concluding day of the Summit, Ram Saran Verma, the Padma Shri awardee, graced the occasion as Chief Guest and shared his experience and farming techniques to the district’s farmers.

He emphasised that rather than considering farming as a compulsion, it should be seen as a factor of providing strength to the country.

Stating that by utilising modern techniques, he has been able to generate crops worth Rs 2-3 crores on 10 acre land, he suggested farmers of Bundelkhand to follow the same technique and also offered to provide them free training on his farm.

Meher Singh, former General Manager of Tata Motors, Germany, another guest on the occasion, said in order to eliminate the vices, there is need for oneself to change his or her mindset.

Other guests, on the occasion, included retired Chief General Manager of National Bank for Agricultural and Rural Development (NABARD), Munish and Regional Passport Officer of Lucknow, Peeyush Verma were also present at the Summit, sharing thoughts on how this event has been instrumental in bridging the gap between farmers, entrepreneurs, and the government and administrative officers.