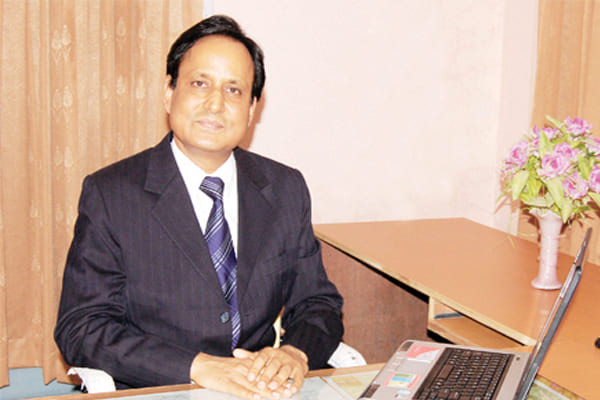 Established in 2002 under the aegis of Banda Education Centre, Kali Charan Nigam Institute of Technology (KCNIT), Banda has established its name as a provider of quality technical education. Thanks to the vision of Chairman Arun Kumar Nigam, the institute has taken on the challenges of survival on its stride and emerged victorious, mirroring the spirit of its founder, writes Arpit Gupta of Elets News Network (ENN) about the KCNIT chairman and shares the inspiring story of his life.

The Journey of Life

After getting my Masters degree in Chemistry from Lucknow University in 1969, I thought of joining an administrative job. After preparing for probably five years I finally managed to get a job in the Ministry of External Affairs by clearing IAS Allied services. The post was that of a Section Officer. After the training and two years of posting in Delhi, I was posted in the Embassy of India to Jakarta as a commercial attache. There I worked for four years. It was a good tenure and I enjoyed it.

But the government service had its own limitations. Meanwhile, I got an opportunity in a fast growing private company in Indonesia owned by an Indonesian of Chinese origin. Those were the days when the economy in Southeast Asia was booming.

It was in 1982 that against the wishes of my parents, friends and well wishers I decided to leave the government service and join the private sector.

Nobody was happy and I was also doubtful. But I was not married at that time so I thought I should take that challenge. I thought that even if I fail, I will be able to earn my bread and butter if not in Indonesia then back in my hometown Banda.

That was a very important move in my life and I was able to do a lot for the group of company where I worked for more than 15 years. I helped establish new factories and supervised functioning of new projects and existing ones. The job involved a lot of travelling mainly to South Korea, Japan and Europe in search of technology and know-how for establishment of new setups in Indonesia.

What made you decide to settle down in India and that too in Banda?

As the time went on, the more I worked the more I got paid. But along with that there was a loss. The loss was that I continued to be an unmarried person. By the time I was nearly 50 I thought of setteling down. Meanwhile, I went to United States of America for two years. I had two choices if I were to come back to India: either to settle down in my hometown Banda or live in a bigger city like Delhi where I had purchased a three-bedroom flat in Patparganj, now called IP Extension. But somehow I thought Banda will be a better choice, the reason being that it was my motherland and I had deep attachment with the city.

But I had no land in Banda and to establish something here first I needed land. So, I purchased five-bighas of land adjacent to the mosque opposite Nawab Tank where I thought I would establish a school. However, my good friends here suggested that probably establishing a technical educational institution here will be a better idea than setting up a school because at that time there were very few private sector engineering colleges in this region.

In the year 2000 and 2001, there was only one private engineering college and in Kanpur known as Maharana Pratap Engineering College. There was none in Banda and Bundelkhand. So, I thought I should try that. Thereafter the search for the land started. At that time, Banda to Naraiani Road had the most undeveloped land and was available at cheap rates.

I wanted to buy a big parcel of land because I knew one thing for sure that if I started my project here nobody would sell me the adjacent land as the cost of the land would immediately go up after the project was announced. So I decided to acquire as much land as I can for my future projects also. I purchased around 40 acres of land here.

Fortunately, the response was so very good in the first year that in 2002 around 120 students came to study here from Kanpur. Over a period of time we had hundreds of students coming from Bihar also. We had to expand our hostel facilities in order to accommodate those students. Till 2012, the demand was good and the placements were also good. However, during the same period there was mushrooming of private engineering colleges in Kanpur, Lucknow, Allahabad and even Bihar.

How did you manage to survive in the face of stiff competition coming from new private engineering colleges?

New engineering colleges started coming up and as a result people started taking admissions locally in their own cities. On the contrary, students in Banda thought to get exposure in bigger cities for better quality of life and so the admissions were diverted from Banda to bigger cities.

But still we continued to survive. As jobs were less in the market placement of students fell short, we tried to make our students placeable despite their background of so called Hindi medium schools. We were able to educate them through training, spoken English skills and personality development.

There had been one advantage that we had since inception. It was that we did not borrow much money for establishment of the engineering college. It was negligible money and therefore our burden for loan servicing was nearly zero. So, even in those days when admissions were less and we had to reduce the fee in order to survive and meet the expenses we faced no financial problems.

Meanwhile those colleges who had borrowed heavily forgetting the problems of less admissions and fixed expenses, they struggled hard to survive. So, we continued to survive despite unfavourable market conditions. Now in order to make our students more competitive in the national market, we are adopting new techniques and skilling them through information and knowledge of new languages as per the requirements of the industry as we realised that there is a big gap in the industry requirement and the educational curriculum. We are now trying to fill that gap.

“It was in 1982 that against the wishes of my parents, friends and well wishers I decided to leave the government service and join the private sector.”

What are the courses you offer to the students?

In the beginning, we had B.Tech and MCA but later we had to close MCA because the MCA course was not preferred as compared to B tech and computer science courses. So, we started MBA. The policy of All India Council for Technical Education allowed us to start diploma courses as well. So, under the banner of AICTE we have now MBA, B.Tech and diploma courses to offer to our students.

What made you to venture into the school education sector?

At the age of 55, I thought that I should get married. Within a year of my marriage, my wife and I were blessed with a son who was taught by a private tutor till he reached a certain age. However, soon enough we realised that it was time that the child should attend a formal school. It was then that the idea of opening a primary school in the name of my late mother with my son as the first student occurred to us. Soon we started the construction of the school as we had enough land for the project. Thanks to the response from the people of Banda that the school which is now affiliated to Central Board of Secondary Education imparts education to students till Class 12.