Information Security has gained immense significance during recent years in view of the exponential growth in cyber threats arising not just from organised groups but also at an individual level. In order to address this in Haryana, a dedicated organisational structure known as the Information Security Management Office (ISMO) along with the scope/charters has been established, writes Munish Chandan, Head of State eGovernance Mission Team and Chief Information Security Officer for Elets News Network (ENN).

The prime job of ISMO is to address the security concerns in an ongoing manner rather than doing this as a onetime effort not only for the IT department but also for all other Departments/ boards/corporations and agencies of the Government. ISMO has been initiating proactive measures to build a robust ecosystem for safe and secure cyber space in Haryana.

Cyber Security challenges are common to all States Governments and Haryana is not an exception. Everyday, athe Government is countering issues pertaining to ransomware, viruses, web defacements, Denial-of-service (DoS) and distributed denial-of-service (DDoS) attacks with protection system not robust enough to counter such attacks. Secondly, the organisational setup in the Government is not strong enough to handle such threats/attacks because the stakeholders in the Government are not that sensitised and keen on handling cyber threats/ information security matters. Besides this, no dedicated officer at State Departments / Boards/ Corporations level looks after and implement the information security initiatives/directions from Government of India and its agencies. Moreover, majority of the security infrastructure is either obsolete/outdated or with limited support/ even if some of the infrastructure is new, it is working in conjunction with old one, posing challenges to digital security. In the current scenario, the approach is to deal with cyber/information security threats in a reactive manner rather than proactive. Further, mostly all government websites are not regularly audited for information security and the vulnerabilities are generally identified subsequent to a cyber-attack which is a cause of concern and embarrassment. This old saying is very relevant to information security and preventive action must be taken with this perspective, as the threats can damage/ delete/ modify whole database in a fraction of the second, resulting in loss of critical data of the public.

The approach of Government of Haryana is aligned towards proactive response to cyber threats, and mentioned below are some of the key steps taken by the State Government for building a secure and resilient cyberspace:

An interactive portal for ISMO (http:// haryanaismo.gov.in/) with e-learning modules on information security topic has been developed. The portal provides courses on cyber security, with primary focus on students such that they can adopt best practices to deal with cyber threats. After completion of the course, candidates have to go through a quiz. There are courses under two categories for students from ‘5 to 8 Standard’ and ‘9 to 12 Standard. For students of class 1to 5 Standard, easy to understand pictorial content is being developed which shall be launched in phase II of the implementation. The overall objective of the portal/e-learning module is to build cybersecurity ecosystem in the State.

Apart from the above, there are many more initiatives taken by the ISMO, Haryana to build safe and resilient cyber space in Haryana. 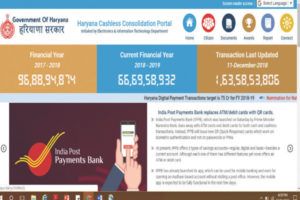 In light of the above, many achievements have been accomplished by the State Government, these include training and sensitisation of approximately 900 government officers /ISOs across various departments, boards and corporations on the concepts of information security. The process of declaring Critical Information Infrastructure (CII) has been initiated and Cyber Security Crisis Management Plan (CCMP) has also been developed. Moreover, ISMS and various other information security policies are notified and ISMO is in process of engaging partners under PPP mode to enhance the awareness levels of ISO and other government stakeholders not only by training but by providing suitable certification based programme. It will contribute towards building/upgradating their skills in the domain of cyber security. Apart from this, many awards and recognitions at various levels and forums for the cyber security initiatives have also been received by ISMO.

Other marquee initiatives of E&IT Department, Government of Haryana

As CISO and Head SeMT are facilitating the rollout of critical IT initiatives, it takes exemplary leadership skills to manage everything and delivering results in a time bound manner. The precedence being set by the State of Haryana for implementation of cyber security and digital initiatives is really praiseworthy and can be leveraged by other States.