A tele-medicine service has been started in the far flung areas to provide the medical facility of consultation with doctors sitting in top hospitals of the country like Apollo, says Lalit Jain, Deputy Commissioner, Sirmaur, in conversation with Gautam Debroy of Elets News Networks (ENN).

You have recently developed MyDC app. Tell us about this mobile app in detail. 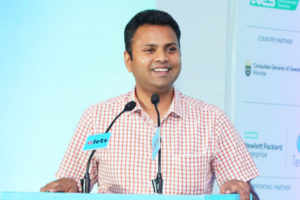 MyDC app provides the opportunity to refer the grievances directly to the district administration, which is then forwarded to the department concerned for resolution through this app. All messages, announcements made by the deputy commissioner of Sirmaur are available on this app.

To benefit the visitors/tourists of other states visiting Sirmaur district, important information like details of the rest houses and hotels in the district; phone numbers of important departments; tourist, historical and pilgrimage centres of the district; and important web links have been provided on the app.

How does MyDC app help in government functioning?

This app will help the government as well as general public through the following upcoming features:

Black Spot options: It will help to mark the landslide prone areas, broken roads as well as the problem of the backward areas to the department concerned.

Anti-Drug options: As we know that many youngsters have been caught in addiction of drugs, so this option will help to trace the places or areas from where drugs are supplied to fulfil our motto against the narcotics – “Destroy What Destroys You”.

The links of government sites is already provided in MyDC app and in future, the government services which will be delivered in the district will also be available on this.

Tell us about some of the latest IT initiatives that you have taken for the development of Sirmaur.

MyDC Android app has been developed by us, which in itself is a great step forward towards ensuring the development of Sirmaur district. It helps people to contact the administration directly.

The website of Mahamaya Balasundari Ji has been developed and facilities like online prashad, online bhandara booking and online donation have been made available on this. People residing in different parts of state as well as the country can access this website from anywhere.

A tele-medicine service has been started in the far flung areas to provide the medical facility of consultation with doctors sitting in top hospitals of the country like Apollo, etc. Various departments/officers/staff are availing the benefits of IT while doing their routine works by exchanging reports through emails and WhatsApp groups, etc. It is helping them utilise their time more judiciously and reducing the manpower required to do a work. It is also a step forward towards making the government offices paperless.

What steps are being taken by the Municipal Council Nahan to make Nahan a smart city?

Nahan city is governed by the Municipal Council Nahan, which was the second municipality of our country. As the norms to become a smart city are required to be fulfilled, the council is developing the basic infrastructure like road connectivity, construction of lanes, parks, and carrying out beautification works.

How is Sirmaur different from other districts of Himachal Pradesh?

The climate of Sirmaur is very pleasant as compared to other districts. The district is surrounded by two states— Haryana and Uttarakhand. The Pajhota, which is known as the Peach Valley, also falls in district Sirmaur. The Fossil Park in Suketi, Sirmaur, is the first park in Asia from where fossils as old as 8.5 million years can be discovered. Shri Renuka Ji Natural Lake of Sirmaur is the biggest lake of Northern India.

What are the biggest challenges for development in Sirmaur?

Nearly 90 percent population of Sirmaur district resides in rural area and the biggest challenge in such areas is the connectivity of roads, lack of drinking and irrigation water supply. To bring agricultural produce to the market to get reasonable price is one of the biggest problems faced by the farmers. Lack of such professional/technical institutions which make the youth self-reliant and the provision of job-oriented education are also among the areas of challenge.