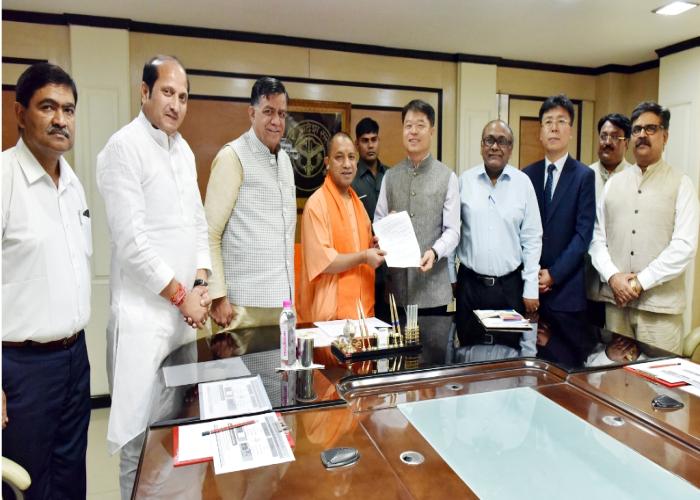 ‘Samsung would be creating some 10,000 jobs in the State by 2020’
The State Government is working to create a conducive atmosphere for more investment into the State and a single window system is being prepared to provide all facilities under one roof to the investors, said Uttar Pradesh Chief Minister Yogi Adityanath. With this, he added, work was being done expeditiously to improve law and order to provide a sense of security to the investors. The Chief Minister said this during a meeting at his Shastri Bhawan office with a five-member delegation of Samsung India, led by its President and CEO HC Hong.

For this instructions have been issued to all district magistrates and district police chiefs to take problems of law and order and other problems, faced by industrialists, seriously.

The Chief Minister also instructed the Industrial Development Department to prepare and present to him a draft for the new Industrial Policy. He added that the present State Government would give priority to enhancing investment in the state through investor-friendly policies which will ensure more and more job opportunities to the youth of the State.

Yogi Adityanath also directed concerned officials to take the problems in Noida and other industrial areas seriously and find solutions. He further added that the State Government was committed to providing more jobs to the unemployed youth in the State and stop their migration and underlined how this was only possible with private investment being encouraged.

With this, the Chief Minister stated that to provide trained manpower to industrialists training would be stressed upon and that help would be sought from the National Skill Development Project. would be taken help of. It may be pointed out here that the Samsung delegation earlier met the Industrial Development Minister Satish Mahana and apprised him of the problems and the Minister assured them of prompt redressal and expressed hope that due to the efforts of the new State Government, investment would get a major boost.