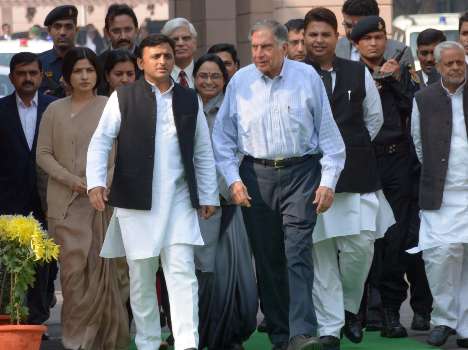 In a bid to introduce transparency in the Public Distribution System (PDS), Uttar Pradesh Chief Minister Akhilesh Yadav has launched an Electronic Point of Supply Machine (ePOS) scheme at fair price shops, in collaboration with the Tata Trust.

The scheme is part of a Memorandum of Understanding (MoU) between the Uttar Pradesh government and the Tata Trust, spanning their activities in the fields of health, education, solar energy, and farming.

The scheme entails ration card holders receiving smart cards to swipe for ration. The system is automatically upgraded, instead of remaining the form of manual records that could be fudged earlier.

Union Ministry of Food and Civil Supplies had earlier said that it planned to equip all rations shops in the country with ePOS systems by 2019 and that each of these machines should also double up as ATMs in the rural parts.

Under PDS, the government supplies subsidised food grains to APL, BPL and Antyodaya ration card holders, through which they are able to purchase essential commodities like wheat, rice, and kerosene.

ePOS would enable real time monitoring of food grain distribution through PDS. The card holders will also be assured of cent per cent distribution.

“The ePOS machines will make working in PDS more efficient and transparent. The complaints of under-weighing would be a thing of the past now. This would also make clear who are the beneficiaries and what are their social status. Once the system in introduced, no one will be able to fool the real beneficiary,” said the chief minister.

Initially, this ePOS machine will be installed in 675 ration shops of Lucknow.

In the next phase, these machines will be installed in 1,500 ration shops  and after review, they will be installed all over the State. To begin with, the scheme has been launched in a few nagar panchayats and rural areas. Following an assessment of the implementation, it will then be scaled up and rolled out across the State.

“The Tata Group has always been associated with schemes that help in alleviating poverty. We work in education sector so that the light of knowledge can dispel the darkness of ignorance,” said Ratan Tata, Chairman of Tata Trust.