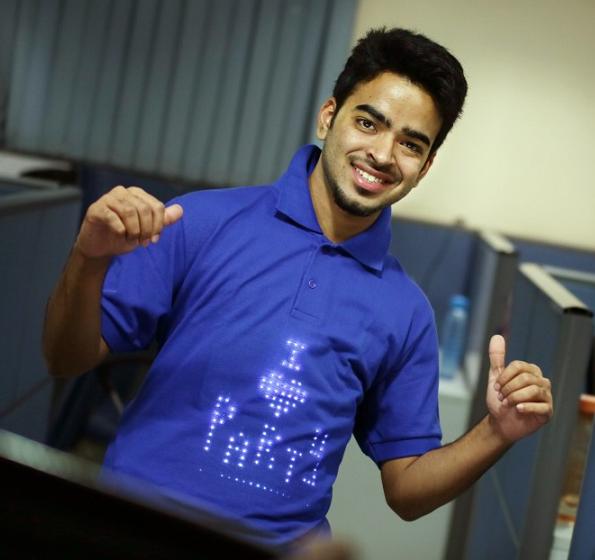 Broadcast Wearables Pvt. Ltd., a Hyderabad-based startup has recently designed a t-shirt which has a inbuilt touchable LED panel. One can switch on-off the LED panel just by tapping on the t-shirt and  a single swipe will enable the LED panel to change the image, which is directly imported from the connected app.

“We aim to introduce innovation in fashion. Your everyday T-shirt becomes much funkier when you can change the design at your will. Our main challenge was to install  the LEDs into the t-shirt and make it comfortable for the user, at the same time,” Ayyappa Nagubandi, Founder, Broadcast Wearables Pvt. Ltd., said. The programmable t-shirt is water-proof; hence it can be washed as well, he added.

A microcontroller attached with a small battery is also installed in the t-shirt which can be paired with the smartphone to transfer visual data from the app to LED panel inbuilt in the t-shirt to be displayed on the garment.

The end user just needs to pair the t-shirt with the app, then design a pattern or upload an image on the app; and send that design to the t-shirt.

The t-shirt has a battery of around 1500 mAh capacity, and the LED is Surface Mounted Device LEDs (SMD-LED) with a flexible Printed Circuit Board (PCB). A total of 792 LEDs are used on the front side of the t-shirt to display the selected graphics.

Besides, a very thin wire will be connected from the inside the arm to the back.

“The t-shirt has been designed in such a way that it incorporates technology without making it uncomfortable to be worn,” Ayyappa said.

The startup, which  has just entered the pre-production phase, is soon to start a crowd-sourcing campaign wherein a price of the t-shirt would be shared. Besides, the startup is also attempting to create an eco-system around the t-shirt with launch of API, so that developers can create unique products out of this technology.