The government is going to start a pilot project on Intelligent Transport System (ITS) in India soon, says Niraj Verma in conversation with Souvik Goswami of ENN

Creation of world class urban infrastructure is on the radar of the new government, wherein the Ministry of Road Transport and Highways plays a vital role. Tell us about the mandate of your department.

The Ministry of Road Transport and Highways has got two important verticals. One is related to transport wing and another to infrastructure wing. We basically look after proper implementation of the Motor Vehicle Act throughout the country when we deal with transport-related issues.
Besides, the ministry is also engaged in formulating policies for the transport sector, including road safety, in the country. On the other hand, for the infrastructure wing, we construct national highways and we declare certain road stretches as national highways based on various certain criteria. Institutions like the National Highway Authority of India (NHAI), which falls under the ministry, has been given the mandate to construct national highways, and ministry also builds up part of various roads in the country in consultation with and help from the state governments.

Urban infrastructure development is said to be essential for a country’s economic growth. Your comments as someone associated with one of the major infrastructure-related ministries?

First and foremost, I would like to clearly state that our mandate is to construct roads in both rural and urban areas in the country. But it is true that urban infrastructure development is crucial. We have to address the issue of congestion in the urban areas. I think we need to have roads in sufficient numbers and designed efficiently to handle this problem. 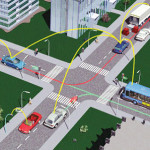 What is Intelligent Transport System?

What kind of ICT initiatives are being implemented by your ministry?

We have successfully implemented ‘e-Vahan’ and ‘Sarathi’ projects under the Mission Mode Project in the transport sector. As the names suggest, these projects deals with registration of vehicles and providing driving licences. These processes have been computerised up to 95 percent in the entire country and we are now collecting and sharing these data with various agencies like traffic-police and transport departments for effective implementation. We are also working on providing hassle-free services to the citizens with the help of these data.

Apart from that, we are also implementing Electronic Toll Collection Centre plan for smooth flow of traffic on highways. We have already implemented the pilot project. Now we have decided to implement it nationwide in a phased manner. All the vehicles will have passive RFID and the present experience of waiting in long queues at toll gates will become a thing of the past. We are hopeful of implementing it completely by 2016.

The ministry is also looking at various measures to ensure passenger comfort while travelling through the national highways. We have conceptualised a new project called ‘RAHI – Road and Highway Information System’ for the purpose. We are focusing on Intelligent Transport System as well.

Tell us something about the Intelligent Transport System (ITS) concept.

In developed countries, one can see detailed information about a particular highway, like weather forecast and traffic congestion updates, are available with the person who is driving a car. That is what we call Intelligent Transport System. In India, we are also thinking to use this kind of advance technological system for better and safe road journey for the citizens. There will be a control room which will have an eye over particular stretches of road.

We have to also see whether we need ITS throughout the country. My own view is that we may not need ITS in the entire country. Presence of ITS will depend on that particular stretch’s volume of vehicular traffic. I think ITS can be very helpful in the urban areas where congestion is a factor and it will be also handy to have ITS in the hilly areas which are prone to natural disasters.
We are hopeful of starting the process of pilot stage of ITS in the next five-six months.

The Modi Government has announced to develop 100 smart cities across the country. What is your opinion on IT-aided creation of urban infrastructure in India?

I think the aim and use of IT for urban development is to provide comfort to citizens. There will be greater use of IT in the coming years for development. In the context of smart cities, I am sure there will be extensive use of ICT. Other components will be there for sure. But in relation to the transport scenario, ITS will play a pivotal role in the future smart cities.

What are the challenges in construction of road infrastructure in the country?

One of the challenges is uncertain flow of investment. Sometimes economic situation also affects adversely. Problem of acquiring land for roads is also there as we need to acquire huge land to build highways. As far as the application of IT is concerned, one of the challenges would be to have a national-level IT architecture.

Please share your vision about the road infrastructure in the country.

My vision as part of the Ministry of Road Transport and Highways is to have a good network of national highways and expressways in the country and we want to ensure hassle-free movement of vehicles.