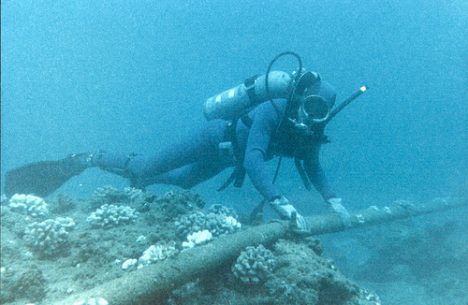 A new 7,800 km undersea data cable has opened to traffic in Asia linking Japan, Malaysia, Singapore and the Philippines, which could aid in financial trade.

The Submarine-cable Express (ASE) transfers data via an optical fibre system at 40 gigabits per second, and is three milliseconds faster than any other cable between Singapore and Tokyo.
The gain in speed may sound small, but could prove critical to financial trades made out of the region.

The high frequency trades controlled by computers, involve making what may be hundreds of thousands of transactions in less than a second — all determined by a programme that tracks market conditions.

With banks and hedge funds competing against each other, the size of the profit or loss can come down to a matter of beating the competition by a fraction of a second. The route for the new cable was chosen to be as straight as possible, reducing the time to get information from one end to the other to 65 milliseconds.

The data transfer capacity of 40 Gbps is the equivalent of downloading a high-resolution DVD in about two seconds. The new facility adds to a web of undersea cables in the waters around Japan.

These include the ones run by Australian operator Telstra International; Taiwan’s largest phone operator Chunghwa Telecom; and the global telecommunications service provider Pacnet, based in Singapore and Hong Kong.