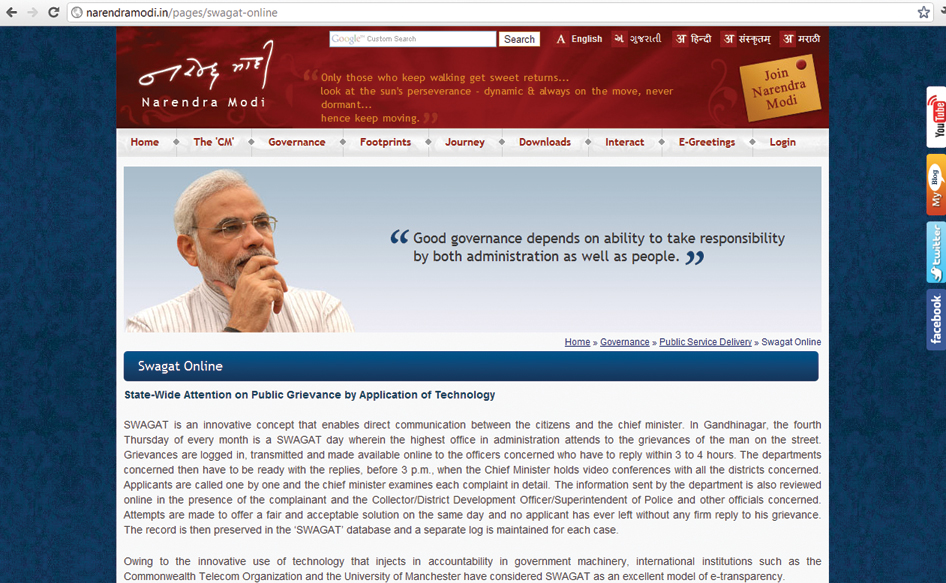 State Wide Attention on Grievances by Application of Technology (SWAGAT) an online portal connecting the Chief Minister District with Sub-district level officers serves the purpose of solving grievances of citizens. SWAGAT offers the citizens of Gujarat a fair opportunity to personally present their grievances to the Chief Minister. This system has all the stakeholders connected in real time leaving no chance for either the aggrieved citizen or the concerned officer to hide or manipulate the facts of the case. Apart from providing satisfaction to citizens, SWAGAT ensures high levels of accountability and transparency in the administration process. The grievances are first presented at the Sub-District or District level so that they are resolved locally. If they remain unresolved after that too, they are referred to the Chief Minister.

SWAGAT has served as an effective tool and feedback mechanism to bridge the gap between citizens and administration enhancing the level of understanding for smoother functions.

The State Wide Attention on Grievances by Application of Technology (SWAGAT) was launched in April, 2003. Gujarat became the first Indian State to launch a combination of digital and communication technology in the form of a grievance redressal programme. SWAGAT serves as an online public portal and video-conferencing set up connecting the Chief Minister and all District and Sub-District Level Officers to solve grievances of citizens.

The Chief Minister’s Office in Gujarat operates a SWAGAT centre, where video conferences are held once every month. This practice has been followed for the past eight years.

On the 4th Thursday of every month applicants arrive at the Chief Minister’s Office in the morning. Grievances are scrutinized, registered and instantly transmitted online to the concerned authorities at the Secretariat, District and Sub-district level. The authorities then register their replies by afternoon on the same day. From 3.00 pm, the Chief Minister personally listens to the applicants one-by-one.

The grievances as well as the replies of the concerned authorities are available through the system on a screen. The concerned secretaries are present along with the Chief Minister, for direct interaction with the aggrieved citizen and district authorities are connected through video-conferencing.

After going through all the aspects of the case, necessary instructions are given for resolving the grievance. A record and separate log is maintained in the SWAGAT database for each case. Monitoring cases is the prime focus of SWAGAT to ensure that solutions are implemented according to instructions given by the Chief Minister. Citizens can view the status of their application online, using their allotted password and login at local Government Offices and at any internet access point.