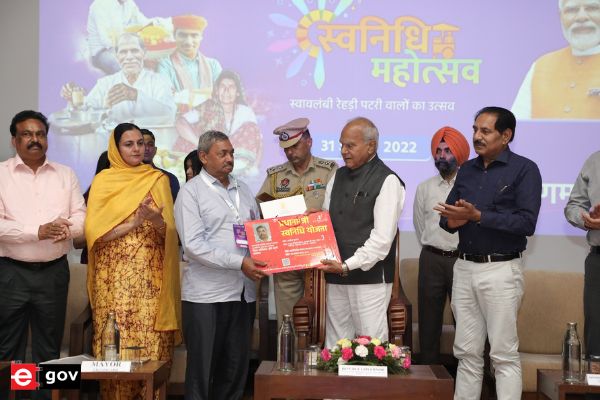 He said that street vendors have been an essential part of the country’s economic growth story with linkages with the formal economy and have always played a significant role in reducing cost of living, by providing goods and services at affordable rates.

While addressing the street vendors and other dignitaries, the governor said that SVANidhi Mahotsav was a festival for celebrating and recognising beneficiary street vendor’s growth story and their contribution towards the Indian economy. The festival aims to celebrate 75 years of India’s independence with these nano-entrepreneurs, honoring their journey under PM SVANidhi scheme for demonstrating credit discipline, digital behavior and displaying their astute business acumen, he added.

He said that the PM SVANidhi scheme was launched during 2020 to facilitate working capital loans to the street vendors to help them restart their businesses which were adversely impacted due to the lockdowns imposed during COVID-19 pandemic.

He further said that this scheme was the first comprehensive effort for financial inclusion of the street vendors. Prior to this, street vendors were dependent on the informal credit channels paying high rates of interest, he said.

It was a zero waste event, organised by the Municipal Corporation, where no plastic item was used. Cutlery used for refreshment including glass, plates, bottles etc. No plastic flowers were used. The venue was decorated with fresh natural flowers, which were disposed off through composting after the event.