From a state with the worst roads to a state which boasts of world class expressways, Uttar Pradesh has surely come a long way. In this article, Tarannum Manjul of Elets News Network (ENN) explores the latest development of the Uttar Pradesh government, the Bundelkhand Expressway, which is all set to transform the landscape of one of the most backward regions in the country.

Uttar Pradesh is all set to become a “State of Expressways”. With the Bundelkhand Expressway all set to be opened for public in June, six months ahead of its scheduled time, UP will have another infrastructural marvel connecting length and breadth of the state. It would be the third functional expressway after the Agra-Lucknow Expressway and the Purvanchal Expressway. The Uttar Pradesh Expressways Industrial Development Authority (UPEIDA) has been working round the clock to ensure that the entire state is covered with expressways. This expressway will not only make the state more accessible, but also ensure better infrastructure in the most backward regions of the state, ushering in a new era of development. 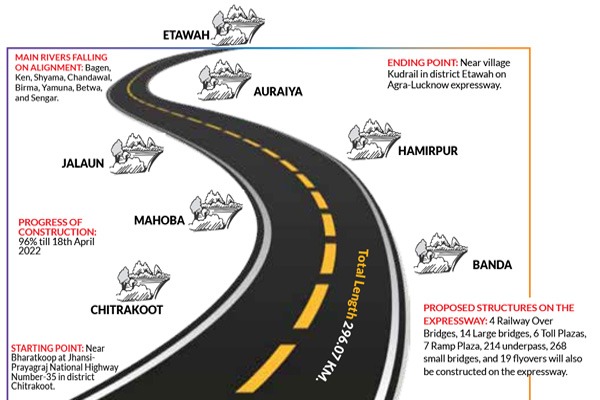 The development index of any state can be analyzed by the infrastructure facilities it provides and the UP government is leaving no stones unturned. The government is gearing up to build a network of expressways, connecting the remotest of corners of the state and ensuring development of every district. The latest in the series of expressways is the Bundelkhand Expressway, touching seven districts of the Bundelkhand region. The expressway will have connectivity to the Agra-Lucknow Expressway and the Agra-Noida Expressway. The Bundelkhand Expressway will reduce the time taken to travel between Chitrakoot and Delhi to just six hours. The 296 km-long Bundelkhand Expressway from Chitrakoot to Etawah in Uttar Pradesh is slated to be completed over six months of schedule. According to official reports from the UPEIDA, 96 per cent of work has been completed. Laying the foundation stone on February 29, 2020, Prime Minister Narendra Modi said that “this project will create thousands of job opportunities and connect the common people with facilities in bigger cities.”

Bundelkhand is divided between the states of Uttar Pradesh and Madhya Pradesh, with the larger portion lying in the latter state. It is situated along the southwestern edge of Uttar Pradesh. With a population of 21 million, Bundelkhand ranks among the least developed regions in north-central India.

The Bundelkhand Expressway will supplement nodes of the Uttar Pradesh Defence Industrial Corridor, announced by the Government of India in February 2018. It is being developed by the Uttar Pradesh Expressways Industrial Development Authority (UPEIDA). This Expressway, divided into six sections, has a scheduled completion date of January 14, 2023. The two sections of the expressway were completed by the end of April, another by May, and the rest will be completed by the end of June this year. The entire cost of the project is expected to be Rs. 15,000 crore.

Talking about the Bundelkhand Expressway, Awanish Awasthi, the Chief Executive Officer (CEO) of UPEIDA, said, “The state government is committed towards development of each and every region and each and every citizen. The expressways have been instrumental in ushering a new era of development in the state of Uttar Pradesh. With expressways like Purvanchal Expressway and Bundelkhand Expressway, we are making sure that development and infrastructure is available in the most backward regions as well. These expressways will not only provide employment opportunities to the people, but will also facilitate industrial growth in the region.”

“The Bundelkhand Expressway has been completed in a record time of 28 months, despite the pandemic and lockdowns. We started it in a leap year on February 29, 2020, and it leaped ahead of all others. It will be a big boon to the region of Bundelkhand and it will not just boost tourism, but also industrial development and employment. Since we have connected the expressway with the Defence Corridor, it will also bring in big names to the region,” Awasthi added.