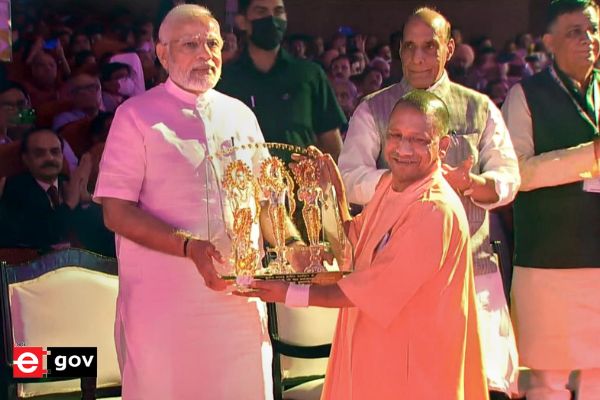 Prime Minister Narendra Modi attended the Ground Breaking Ceremony 3.0 of the UP Investors Summit at Lucknow today. During the Ceremony, the PM laid the foundation stone of 1406 projects worth more than Rs 80,000 crore. The projects encompass diverse sectors like Agriculture and Allied sectors, IT and Electronics, MSME, Manufacturing, Renewable Energy, Pharma, Tourism, Defence & Aerospace, Handloom & Textiles, etc. The ceremony was attended by top industry leaders of the country. Union Minister Shri Rajnath Singh and Chief Minister of Uttar Pradesh Yogi Adityanath were among those present on the occasion.

Speaking on the occasion, the PM thanked the investors for showing their faith in the capability, dedication, hard work and understanding of the youth of Uttar Pradesh. He also asked the industrialists to visit Kashi. “As a representative of Kashi, I would urge you to visit my Kashi. Fact that Kashi, along with its ancient glory can emerge into a new version of itself, is a living example of the capabilities of Uttar Pradesh”, he added.

The double engine government has worked well for UP. Several sectors have flourished due to this. pic.twitter.com/GjmPRzOZQo

The Prime Minister said that proposals that were entered into today will create new possibilities in Uttar Pradesh and reflect the growing confidence in the growth story of Uttar Pradesh. “Only our democratic India has the power to meet the parameters of a trustworthy partner that the world is looking for today. Today the world is looking at India’s potential as well as appreciating India’s performance”, he said. The Prime Minister informed that India is the fastest-growing of the G20 economies and is at number two in the Global Retail Index. India is the third-largest energy-consuming country in the world. Last year, a record FDI of $84 billion came from more than 100 countries of the world. India has created a new record by exporting merchandise worth more than $417 billion i.e. Rs 30 lakh crore in the last financial year, he informed.

Referring to the completion of eight years of the NDA government at the centre, the PM pointed out that “over the years we have moved ahead with the mantra of Reform-Perform-Transform. We have laid emphasis on Policy Stability, Emphasis on Coordination, Emphasis on Ease of Doing Business”. He illustrated the point further by talking about reforms that are uniting the entire country as one nation. He said “we have worked to strengthen India as one nation with our reforms. One Nation-One Tax GST, One Nation-One Grid, One Nation-One Mobility Card, One Nation-One Ration Card. These efforts are a reflection of our solid and clear policies”, he added.

Speaking about the strides made in Uttar Pradesh after 2017, the PM said “for faster growth, our double engine government is working together on infrastructure, investment and manufacturing. The allocation of unprecedented capital expenditure of Rs 7.50 lakh crore in this year’s budget is a step in this direction”, he said.

Further, he added that the improved law and order situation has restored the confidence of the business community, created a proper atmosphere for industry, and improved the administrative systems in the state. He said that as an MP from the state, he has felt the capability and potential in the administration and government of the state that the country expects from them.

The PM complimented the changed mood and work culture of the state machinery. Uttar Pradesh is home to one fifth or one-sixth population of the country. Therefore, it has a huge bearing on the development of the country. Describing the inherent strengths of Uttar Pradesh, the Prime Minister said that nothing can stop the state from moving on the path of development. He informed that in the latest Budget, there was an announcement of a 5 KM chemical-free natural farming corridor on both the banks of Ganga. Uttar Pradesh has 1100 KM of Ganga River covering 25-30 districts. This will create huge opportunities for natural farming. He said for the corporate world now is the golden opportunity to invest in the agriculture sector. He said that PLI schemes and allocation of 7.5 lakh crore rupees for capital expenditure will also benefit the state. He also mentioned the defence corridor in the state as a harbinger of new opportunities. Steps like modern PowerGrid, gas pipeline, multi-model connectivity, a record number of expressways, strengthening of connectivity of economic zones, modern railway infrastructure, Eastern and Western Dedicated Freight Corridor all are converging in Uttar Pradesh with a promise of giving a new push to the development of Uttar Pradesh.

The Prime Minister said that in the last few years a new culture of delivering projects on time has developed in the country. Citing the digital revolution as an example of this tendency, the Prime Minister reiterated the growth story of the country in recent years. He informed that in 2014, there were only 65 million broadband subscribers in our country. Today their number has exceeded 78 crores. In 2014, one GB of data used to cost around Rs 200. Today its price has come down to Rs 11-12. India is one of the countries in the world where data is so cheap. In 2014, less than 100 gram panchayats in the country were connected with optical fibre. Today, the number of gram panchayats connected with optical fibre has also crossed two and a half lakhs. Before 2014, we had only a few hundred start-ups. But today the number of registered start-ups in the country is also reaching around 70 thousand. Recently, India has also set a record of 100 unicorns. “We are with development by policy, decisions and intention. We will all be with you in your every endeavour and will support you every step of the way”, the Prime Minister assured the investors and industrialists.