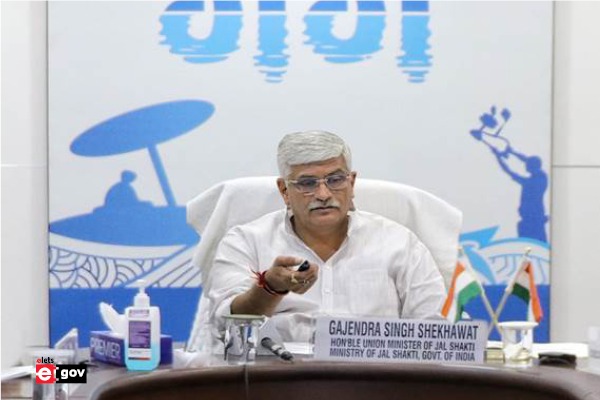 Addressing the gathering after the launching of the dashboard, the Union Minister for Jal Shakti, Shri Gajendra Singh Shekhawat began by talking about the 4P principle – political will, public spending, partnership and people’s participation to make a programme successful. The Prime Minister has emphasized on a number of occasions the importance of people’s participation in making Namami Gange a success, he said.

Shri Shekhawat said that a lot of work has been done in sewerage management, ghat development, biodiversity, afforestation, spring rejuvenation, wetland conservation and the involvement of voluntary organisations like Nehru Yuva Kendra Sangathan, Ganga Praharis etc. has been inspiring. But, still, there is a long way to go and efforts should also be made to sustain the work which has been done.

The Union Minister further said that it is the responsibility of the DGCs in partnership with various organisations to instil a sense of ownership and duty in the people to make Ganga Aviral and Nirmal. “It is DGCs responsibility to make sure that assets created are properly used and functioning, no untreated water/solid waste goes into Ganga, proper monitoring, afforestation to mitigate the effects of climate change, protection of biodiversity and wetlands etc.,” He added.

Shri Shekhawat stated that the Digital Dashboard launched today will help the DGCs in enhancing people-river connect. Pointing out that some DGCs are not conducting the regular meetings, he urged the District Magistrates to make sure that Ganga cleaning becomes a priority and under the chairmanship of District Magistrates cleanliness in River Ganga is ensured.

The Union Minister added that cleaning of Ganga means cleaning all its tributaries and it is important that the district officials take ownership of the assets created under the Namami Gange Programme in the Ganga Basin and ensure their smooth functioning.

The Minister emphasised the DGC 4Ms and said that it is essential that the monthly meetings are organised at the stipulated time (2nd Friday of every month). He also talked about performance analysis of the DGCs based on various parameters, including the monthly meetings and acknowledge the ones doing a good job to generate competitiveness.

Talking about Arth Ganga, the Union Minister said that it is Prime Minister Shri Narendra Modi’s vision to use the globally known brand of Ganga to develop a sustainable economic model around the River to benefit the local people. “Economic activities like tourist circuits, yoga, AKAM, architecture, biodiversity etc. must be developed along River Ganga,” he said, adding, “Ganga Yatra is another activity that the Prime Minister emphasized and I am happy that the State of Uttar Pradesh conducted the Yatra.”

Shri Swatantra Dev Singh said that under the leadership of the Prime Minister, work is being done with renewed vigor and approach, which is bringing smiles to the faces of the people. He lauded the efforts of Namami Gange and said that DGCs exemplify the success that has been achieved to clean Maa Ganga. He expressed his delight to be part of the launch of DGC Digital Dashboard today and said that such steps send a good message in the people.

Explaining the concept of the novel experiment to start the District Ganga Committee Forum (DGC-4M (Monthly, Mandated, Monitored and Minuted) meetings, the DG, NMCG urged the District Magistrates to include it in their monthly meeting schedules. He said that agendas for the meetings may be in three groups three-fold – the mandated agenda can be of the NMCG projects in the district, monitoring of the drains which bring in solid and liquid waste, the functioning of ghats and crematoria, promotion of natural/organic farming, wetland development etc. The state and local specific agenda could be the issues like sand mining, local Pujas, biodiversity activities like conservation of Dolphins etc. and seasonal agenda could be water conservation campaigns like Catch the Rain campaign during monsoons, Swachhta Pakhwada, afforestation drives, Azadi Ka Amrit Mahotsav etc. He said that the launch of the DGC Digital Dashboard will go a long way in establishing a people-river connect and will play an important role in the success of the Namami Gange Programme.

District Ganga Committees were constituted in the districts of the Ganga River basin for putting in place a mechanism at the district level to ensure people’s participation in management and pollution abatement in river Ganga and its tributaries. The DGCs are mandated to ensure proper utilization of assets created under Namami Gange, monitor drains/sewage falling in River Ganga and its tributaries, create a strong connection of people with Ganga rejuvenation.