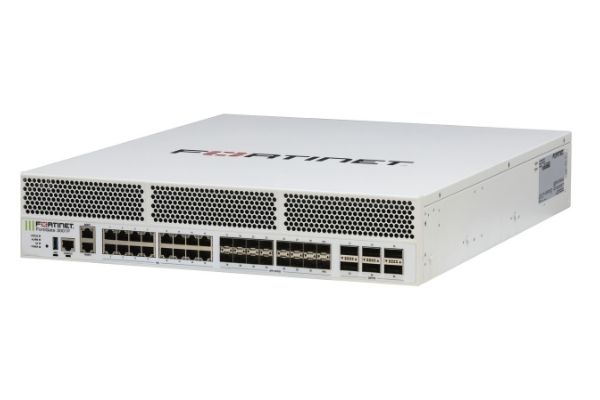 Organisations today must balance the pressure to accelerate digital innovation and ensure critical applications meet certain compliance, performance, control, and strategic business needs. In fact, because of these challenges, “customised and legacy applications — about 55 per cent of enterprise applications — are only very slowly migrating to cloud-based options.” Organisations instead are developing hybrid IT architectures, comprised of data centres, campuses, interconnecting branches, home offices, and multi-cloud deployments. This has led to an expanded attack surface, creating a perfect storm for bad actors to launch cybersecurity attacks. FortiGate 3000F helps secure the data centre and hybrid IT architectures in the following ways:

FortiGate 3000F vs. Competitors
Below is a comparison of the top firewalls on the market against the target performance numbers of the FortiGate 3000F series. Security Compute Rating is a benchmark (performance multiplier) that compares FortiGate performance versus the industry average of competing products across various categories that fall within the same price band.

Fortinet solutions, including the FortiGate 3000F, deliver security-driven networking and the industry’s highest-performing cybersecurity mesh architecture via the Fortinet Security Fabric, which converges networking and security across the entire connected environment and provides protection whether on-premises, virtual or cloud-based environments for any device, application, or location. Specifically, Fortinet received the highest scores overall in the Enterprise Data Center, Distributed Enterprise, and SMB Use Cases for its FortiGate solution, and the second-highest score in the Public Cloud Use Case in January 2022 Gartner Critical Capabilities for Network Firewall. Moreover, Fortinet believes it is because of continued security-driven networking innovation that it has been named a Leader in the past two years in both the Gartner Magic Quadrant for Network Firewalls and Magic Quadrant for WAN Edge Infrastructure for the same platform – FortiGate.
Rajesh Maurya, Regional Vice President, India & SAARC, Fortinet said, “Hybrid compute will be around for the foreseeable future. The FortiGate 3000F, powered by Fortinet NP7 and CP9 security processing units, continues to move the performance bar forward, but just as importantly adds more converged networking and cybersecurity applications to the traditional network firewall. These applications include SD-WAN central hub, SSL inspection, and zero-trust network access proxy. We believe that it’s because of these innovations that Fortinet has ranked first for three consecutive years in the Enterprise Data Center Use Case in the Gartner® Critical Capabilities report for Network Firewalls.”