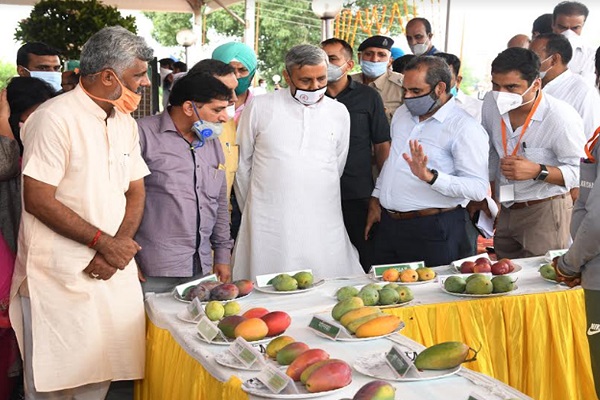 JP Dalal, Minister of Agriculture and Farmers’ Welfare, Government of Haryana said, the State collaboration with Israel is working on new technology in the field of horticulture. Speaking at the inauguration ceremony of a five-day fruit festival organized by the Horticulture Department of Haryana in Kurukshetra today, he said, by adopting this latest technology, the Centre of Excellence for Fruits and Vegetables have been set up in various districts in Haryana and the State is planning to set up three or four new Centres.

On this occasion, the Minister planted a mango sapling and later inspected various varieties of fruits including mango, peach, plum, pear, guava, and pomegranate planted over 30 acres of land.

During his address, he said, the department has been successfully organizing Mango Mela in Pinjore for many years but this time the Mela has been brought to the mango orchards and for the first time, the fruit festival is being organized in the Sub-Tropical Fruit Centre of Ladwa. This year the fruit festival is not focused on just one fruit, rather will focus on different fruits every day including mango, litchi, guava, pomegranate and pear, he added.

In the wake of COVID-19 only a few farmers have been invited the rest are being addressed through a webinar, the Minister said. Ever since Prime Minister Narendra Modi and Chief Minister Manohar Lal have assumed the charge in the country and State, policies are being formulated in the interest of the farmers. To double the income of farmers in the State more attention is being paid to horticulture, dairy, milk and fisheries. Loans are being provided to the educated youth for setting up processing units so as to provide employment.

Further, the Minister said that loans are being provided at lower interest rates for businesses like horticulture, dairy, fisheries and the state aims to provide employment to 10,000 youth a year. He said that to save water, the state is laying emphasis on micro-irrigation and has fixed a budget of Rs 1000 crore for this purpose. In this manner every drop of water will be utilized for irrigation on the lines of irrigation methods being used in Israel.

A decision has been taken to deposit an amount of Rs 6000 per year per family in the accounts of the farmers having land up to 5 acres. This amount will also be used for crop insurance. Apart from this, Haryana is the first state in the country where 50 lakh animals were vaccinated whereas 1.5 crore animals were vaccinated in the entire country. In this region, the Foot and Mouth Disease in cattle has been eradicated completely.

He said that Pashu Kisan Credit Cards will be issued to five to six lakh cattle owners in the state and a collateral-free loan of Rs 1.80 lakh will be provided to eligible persons on this card.