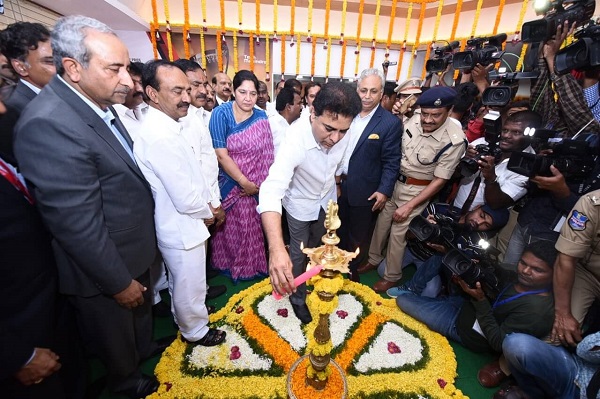 Telangana IT and Industries Minister KT Rama Rao has inaugurated two IT campuses of Tech Mahindra and Cyient in Warangal today. The two IT majors will commence their operations from Madikonda IT Park, Warangal.

Rao said, “We wish to build an IT ecosystem in the state where IT majors across the country can come and invest. The State Government will take care of the infrastructure facilities and we also assure you that there is no dearth of talent in Warangal. The future lies in the Tier-II cities of the country. The Government of Telangana has plans to develop Tier-II cities like Warangal, Karimnagar, Nizamabad, Mahaboobnagar, Khammam, Nalgonda, etc. as IT hubs. This will ensure that not only the IT majors can invest in the state but also provide employment opportunities to the youths of these cities.”

The IT major came forward to establish its unit following a meeting with Rao two years ago. The Tech Mahindra unit is likely to provide employment to nearly 1,000 software engineers.

Commenting on the opening of the development centres, Gurnani said, “Our vision is to make Telangana an innovation and Research and Development destination and not just an IT destination.”

Thanks @MinisterKTR @KTRTRS for your gracious presence. Our vision is to make #Telangana an innovation and R&D destination and not just an IT destination.. https://t.co/IzB5H65f1l

The new branch of the Cyient is expected to accommodate up to 1,000 employees. The three-storey building with about 60,000 sq ft was constructed at a cost of Rs 25 crore on a five-acre campus. Two other blocks in the adjoining building provide working space for 200 software engineers. The 100 employees working in the incubation centre currently will be shifted to the new building after the inauguration.

According to Reddy, the opening of the development of centre of Cyient would facilitate 600 jobs tech jobs.

A milestone in @cyient journey. Happy to have Cyient development centre open at #Warangal & facilitate 600 tech #jobs. Thank you #KCR garu @TelanganaCMO and @KTRTRS for encouraging #IT industry to bring intelligent #technology to #Telangana pic.twitter.com/XKxRwPJWzl

Cyient’s Warangal Development Center supports telecom customers globally with plan & design and engineering services for their mobile and fixed-line networks. The company works with several of the largest communications service providers in the US, Europe and Asia-Pacific region helping them accelerate the deployment of 5G networks, expand fiber-to-the-home coverage and implement digital solutions to enhance the customer experience.