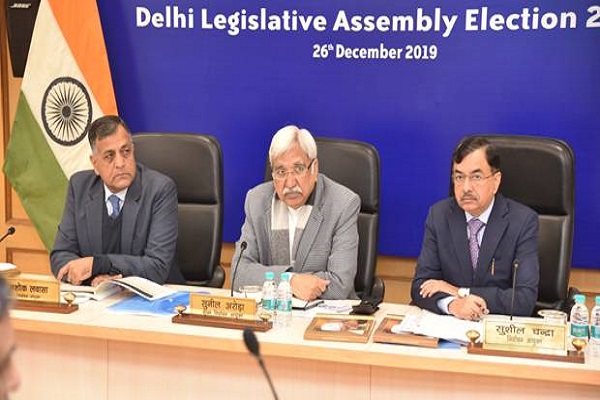 DEOs, DCPs, Chairman NDMC, Joint CPs, MCD Commissioner and CEO of Delhi Cantonment Board and nodal officers of various enforcement agencies attended the meeting. There was a separate meeting held with Chief Secretary and Police Commissioner of Delhi.

Dr Ranbir Singh, CEO, Delhi also made a brief presentation during the meeting highlighting the status of preparedness in regard to electoral rolls, manpower availability, EVMs/ VVPATs, SVEEP activities focusing and targeting low turnout areas for increasing the number of voter turnout and training of all election officials. Singh also informed the Commission about the special measures taken for facilitating PwD and senior citizens voters including pick and drop facility.

Praveen Ranjan, Special Commissioner, Delhi Police who is State Police Nodal Officer also gave a presentation about the general law and order situation prevailing in Delhi and all the plans being set by the Delhi Police to enforce all the measures as mandated by the Commission.

The DEOs were instructed to properly coordinate with local bodies to remove any noticed deficiency. The Commission put much importance on the need for detailed hands-on training on EVM/VVPAT and directed the DEOs to personally monitor this.

The Commission emphasised on rigorous training for all MCC/ Expenditure Monitoring Teams on cVigil to take immediate effective action against any complaints lodged by the citizens on this app. Commission has also directed the Transport Depart to ensure a sufficient number of smaller size vehicles for easy movement of polling parties and machines in narrow lanes.

The meeting with Chief Secretary, Principal Secretary (Home) and Commissioner of Police Delhi, the Commission has asked all to ensure smooth supervision and coordination with all Delhi Government Departments for peaceful conduct of election.