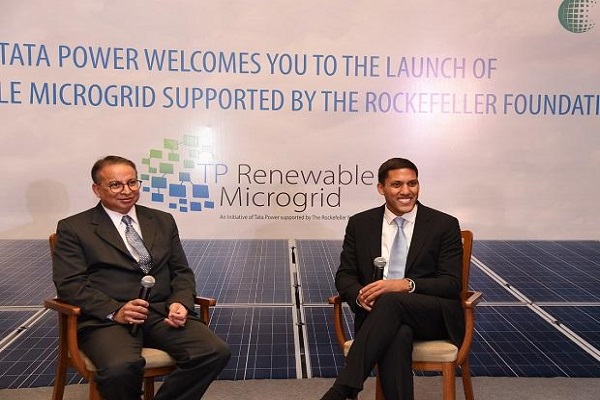 Tata Power on Monday announced a new venture, TP Renewable Microgrid Ltd in collaboration with the Rockfeller Foundation to set up 10,000 microgrids for providing clean energy across rural India.

TP Renewable Microgrid Ltd, which will be operated and managed by Tata Power, will build the microgrids through 2026 that will cater to nearly 5 million homes and enterprises across rural India, directly impacting the lives of 2.5 crore people over the next decade. The venture will become the world’s largest microgrid developer and operator, Tata and Rockfeller said in a joint statement.

The plan “represents important scaling up of efforts to provide access to affordable, reliable and clean electricity in India, and will serve as a model for expanding access to more than 800 million people who are without power worldwide,” both the organisations said in the joint statement.

Speaking on the challenges of scaling up the microgrids business, Rajiv J Shah, President, The Rockfeller Foundation was quoted as saying, “The entire strategy is to have the right partner and Tata Power is absolutely the right partner, which brings a level of scale and sophistication that facilitates bringing down the price considerably. We believe it will be on par with grid power and it is not just about the price, but also quality and reliability, which is not being met by grid power.”

In March, almost all homes were lit up however reliable power supply is still a luxury for most citizens in the rural communities. The distribution facilities due to nuisances of power theft and poor billing tend to curb regular supply to contain the losses. As a result of which, rural homes and enterprises still lack affordable power supply. With over 40 percent of rural homes in Uttar Pradesh and Bihar are left with no choice but to rely on diesel generators, which is not only expensive but a massive source of pollutant.

“By replacing diesel generators, TP Renewable Microgrid aims to reduce annual consumption of the fuel by 57 million liters and carbon emissions by 1 million tons. The initiative will be managed and operated by Tata Power while the Rockfeller Foundation will provide technical expertise,” they said in the joint statement.

This collaboration with the potential of renewable microgrids will run in parallel with the Government of India’s mission to electrify all the rural areas of the country that are currently suffering from poor reliability by traditional grid-based power supply.