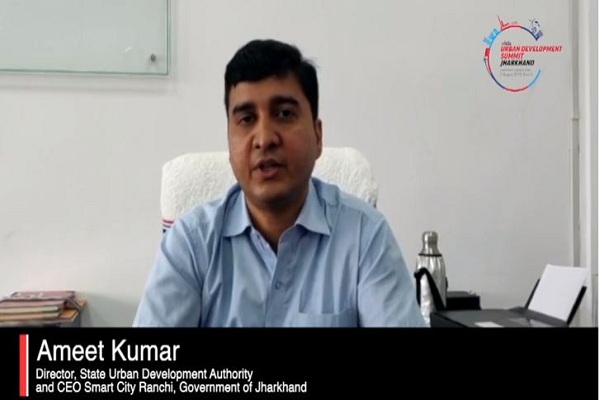 What is the scenario of Smart City Mission in Ranchi? What are the initiatives and future plans under this mission?

One of the main features of Ranchi Smart City project, is that we are developing green field projects in an area of 656 acres of land in HEC area. We are going to develop integrated road projects that will have provisions for utility ducts, for electrical cables, drainage systems, sewage systems, drinking water, gas pipeline, etc. Then, there are some important projects like the convention centre, the civic tower, which are being developed in the same area. So under the area-wise development plan, purpose is to develop basic infrastructure and some of the institutional buildings.

Additionally, land has been marked for residential, commercial, mixed development as well as institutional purposes. These land parcels will be auctioned to private developers. For that purpose, a land allotment policy is being formulated. Once we get the approval from cabinet, we will start online e-auction of this land in an open and transparent manner. Whosoever will be taking this land, they will be developing the infrastructure as per the master plan approved by cabinet. So overall, there will be a planned development. These are the main highlights of the Ranchi Smart City project.

What are your priority phasewise projects?

At present, under Ranchi Smart City project, we have already started public bicycle sharing system. The first phase has started already. Under this, 60 dock stations have been developed and 600 smart bicycles are running. We are planning to start the second phase by August or September, this year. This will include the airport area, HEC area, bypass road and more. This will improve the connectivity. Apart from that, in all the area based development projects, contractors have been assigned the work and the execution has started. Under this, work for power station projects, drinking water projects, is already underway. And, some other projects, like pan city projects which come under the existing Ranchi Municipal Corporation Area, are also under execution.

What has been your experience of public bicycle initiative in Ranchi?

The Charted Bike is the agency which is executing the project in Ranchi. And this is a very good sign for Ranchi that despite no dedicated bicycle tracks in the city, the average footfall of bicycle per day is quite on the higher side as compared to other places where Charted Bike has implemented the scheme. This shows the acceptance of public bicycles by people of Ranchi. We have seen that in the Morabadi area, people- who used to come for morning and evening walks- have now started using bikes. Apart from that, we are coordinating with several private and government offices urging them to discourage usage of scooters, bikes and other fuel based vehicles by their employees. Instead, we are motivating them to choose ecofriendly transport system. Several offices have passed office orders related to this. So overall, it is a very positive sign.

What areas will it cover in the next phase?

The next phase will have 60 dock stations and 600 more cycles. This will cover HEC area, airport area and the full bypass road.

When we talk about urban transformation, the main problem relates to land acquisition and allocation. How the department is overcoming this challenge?

Yes, definitely this is a totally new project for us. We have seen several examples of green field development projects in the country. We are hopeful of overcoming this challenge by studing and implementing the best practices. We are getting several queries from developers. We are trying to start the auctions by month of August. Depending upon the response, we will decide how to go about it. If some queries or advice comes related to cost of land and other things, some revisions can be done, if required.

Comparing with other smart cities in India, which other projects are you going to implement in near future in Ranchi? Along with IT implementation, more focus is on infrastructure development. What are your views on this?

There is a pan city scheme of C4- Command Control & Communication Centre, in the city. This project is already under execution. The detailed survey and other preliminary work have been done. We are targeting to get this C4 scheme completed by end of this year i.e. December 2019. Thereafter we will be scaling up many IT initiatives, like payment of taxes or traffic management or environmental monitoring.

“At present, under Ranchi Smart City project, we have already started public bicycle sharing system. The first phase has started already. Under this, 60 dock stations have been developed and 600 smart bicycles are running. We are planning to start the second phase by August or September, this year.”

We talk about urban transformation and smart cities. Ultimately, what we want are sustainable, resilient cities. What is your view on this?

Yes, the green field project is totally based on this concept. The plan has been prepared keeping in mind that it caters to planned development. Most important thing, accessibility through roads is the first thing for any green field project. That has been planned. Besides this, focus is also on development & integration of other utilities, from green and sustainability point of view.

There is a lot of talk about JUPMI. Can you talk in detail about JUPMI and what is the vision behind this project?

JUPMI means Jharkhand Urban Planning and Management Institute. Basically we want to create an institutional hub for all sorts of urban infrastructure planning and capacity building. It will help in improving the urban planning architecture, designing, and other things. Initially the thought was that the government will be running the institution. But now we are trying and inviting several world class universities to be a part of this project. We have sent a request to top 100 ranked cities in US and top 100 institutes of India. We have received positive response from them. Not just Jharkhand, JUPMI is being developed in such a way that it can be a good management institute for the Eastern region as well. The response has been very positive so far. We are hopeful that it would be a state-of-the art institute for the state.

Most of projects are being made under PPP model. There is always a negative side of PPP. Industry stakeholders always talk about its limitations and restrictions over this. What is your take on this?

Recently we conducted a stakeholder meeting for the public-private partnership policy. The state government has drafted a policy and now it is under consideration of the cabinet for its approval. We are working on major projects like development of bus stands, ISBTs, and the city transport services. Planning has also been done on redevelopment of market projects in Jamshedpur. We had a very detailed stakeholder consultation regarding this. Vadodra, Ahmedabad and Karnataka bus stands are good examples where people have developed ISBTs on PPP model. Based on that, we are going to formulate our policy. The first priority is to create infrastructure rather than earning revenue for the state government. We are focused on developing important and citizen-centric infrastructure.

“We have seen several examples of green field development projects in the country. We are hopeful of overcoming this challenge by studing and implementing the best practices. We are getting several queries from developers. We are trying to start the auctions by month of August. Depending upon the response, we will decide how to go about it.”

Since urban transformation is very much related to urban transportation, urban healthcare and other similar components, what is your view and how department is going to implement projects in such areas?

Under the smart city mission, we are in the DPR development phase. In recent years, several attempts have been made to augment urban transport, but unfortunately it was not up to the required mark. At present, RMC is running some of the city buses. In coordination with RMC, we have identified 5 important routes, catering to the outskirts of the city. Based on that, we are going to prepare the DPRs and very soon we will be initiating the tendering process.

According to you, what is the role of IT in e-governance?

How is it helpful in the smooth functioning of the government? It is the main link between various infrastructures we are developing for citizens. Like recently all the smart cities have been told to develop an impactful project in next 100 days, i.e., before 2nd October 2019. Acordingly, Ranchi Smart City is developing ‘KARTA app’. Basically, it is Karya Aur Upyog Takniki Aadhar. It is a service providing application just like UrbanClap and any other apps. Suppose, for example , a person in the urban area is in requirement of say, a plumber, electrician, tutor, or other services. Such a person can download KARTA application and get connected to the desired service provider. It will be based on technology. Any service provider who is in nearby locations, will be flagged about the person’s requirement and he can get deliver the desired services.

It will provide people in the unorganized sector an opportunity to get access to a bigger market in an organized manner. This is just an example. Similarly, we are having different apps for different purposes. We are integrating all the features in the same mobile app. I think by 2020, these changes will be very impactful for Ranchi citizens.

In the end, is there any message you want to give to industry stakeholders to come and explore the Ranchi Smart City and overall Jharkhand?