Home News P Chidambaram being interrogated at the CBI headquarters; will be produced before...
Facebook
Twitter
WhatsApp
Linkedin 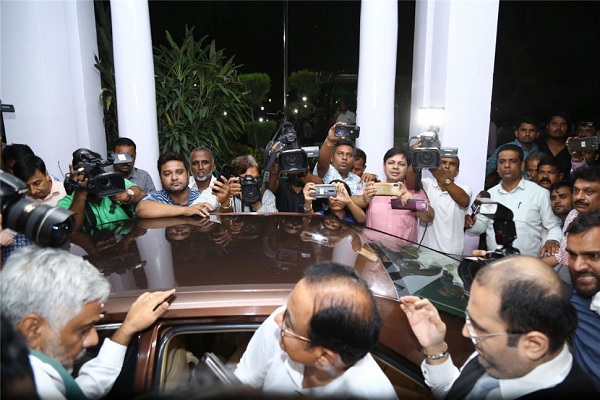 Former Union minister P Chidambaram is currently being interrogated at the CBI headquarters. He will be produced before a special court at around 4-5 pm today. Chidambaram was taken to the CBI headquarters last night after being arrested from his Jor Bagh residence. Customary medical tests were conducted and he remained there overnight.

This development comes after Delhi High Court rejected Chidambaram’s anticipatory bail plea. He has now moved the Supreme Court seeking interim protection. His plea will be taken up on Friday.

“My lawyers have told me that despite their impassioned pleas, the cases will be listed only on Friday. I bow down to the orders of the SC,” said Chidambaram.

BJP MP Satya Pal Singh told ANI, “Chidambaram ji is a former union finance and home minister. He is an intellectual and knows the law. He should not have behaved like this after the court’s order. What happened was not good. Had he surrendered earlier, his dignity would have remained intact.”

Congress’ Salman Khurshid remarked: “It is deeply distressing that all that had to happen. There was no question of not being answerable to the law. The matter is listed on Friday, they could have waited till then to see what the Supreme Court wants to do.” Khurshid is also representing Chidambaram in the Supreme Court.

The Supreme Court on August 21 refused urgent listing of Congress leader P Chidambaram’s petition seeking protection from arrest in the INX Media scam cases. The top court said the defects in the petition were removed just now and it “cannot be listed for hearing today itself”.

“Without listing of the petition, we cannot hear the matter,” said a bench comprising Justices N V Ramana, Ajay Rastogi and M Shantanagoudar.

Rajasthan Chief Minister Ashok Gehlot tweeted, “Every Indian citizen has a legal right to defend himself and utilise all legal remedies available as per Indian legal system. The hurry of investigating agencies to catch hold of P Chidambaram is beyond any justification. It clearly shows that they are working under pressure.”

RS Surjewala, Congress spokesperson said, “The shameless witch-hunt and unheard of abuse of CBI/ED by Modi Govt 2.0 is playing on every TV screen in India. It’s a sham and shame that democracy stands dead in the hands of the BJP.”

Congress leader KC Venugopal told ANI, “In FIR, P Chidambaram’s name is not there, but they want to arrest him. We aren’t against law but the way in which they’re doing things, it’s evident that it is a clear case of political vendetta. Those who’re attacking govt, they want to make them silent.”

Meanwhile, ED has widened the probe against P Chidambaram. The federal agency has found evidence where alleged illegal deposits of amounts in excess of Rs 300 crore were made in a single shell firm after kickbacks were received by P Chidambaram and his son Karti Chidambaram in lieu of granting illegal Foreign Investment Promotion Board (FIPB) and Foreign Direct Investment (FDI) approvals.