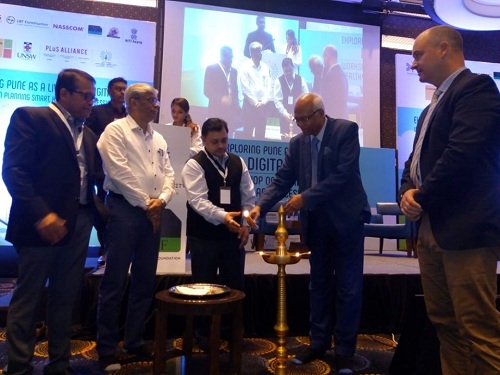 The Workshop highlighted on the next generation of data driven methods and decision-support systems focused on transport and accessibility, and urban environment addressing local and global challenges around sustainability technology and resilience.

With an array of keynote addresses and panel discussions on the various areas pertaining to the key themes participated by PSCDCL, UNSW professors and researchers and Vice Chancellor of Pune University as well as industry members working towards Smart City Mission.

The workshop began with a welcome address by Dr Jagtap. He gave an overview of key impactful projects and the importance and implementation of integration of data with the Command and Control Centre thus innovatively breaking away from the silhoes that have been created by various agencies that hold data repository. “We need to mobilise data from various sources and utilise it for betterment of society. We need to treat the city as Living Lab,” he said.

Dr Raghunath Mashelkar, Padma Vibhushan, Former DG of CSIR and Chief Guest said, “Talent, technology and tolerance are the three elements that distinguish Pune from other cities thus making it into a favourable destination for global organisations to come and work in the city.”

In his vote of thanks, Bose stated, “Pune Smart City has been undertaking several initiatives in leveraging data and technology to drive innovation in partnership with academia, industry and various other organisations. Living Lab is a new concept in Indian context and is the next logical step for all the various efforts which Pune Smart City has been undertaking. In this context, partnering with the world-renowned PLUS Alliance is a matter of privilege for us.”

The panellists spoke on various topics that included Smart City and Living Lab Nexus, Environment and Livability in a Smart City, Living Lab in Pune, Addressing Transport & Mobility Challenges with Big Data and Smart Cities- A use case perspective.

The Workshop was supported by L&T Construction, NASSCOM, Pune Municipal Corporation (PMC), NITI Aayog and the Smart Cities Mission of Ministry of Housing and Urban Affairs.