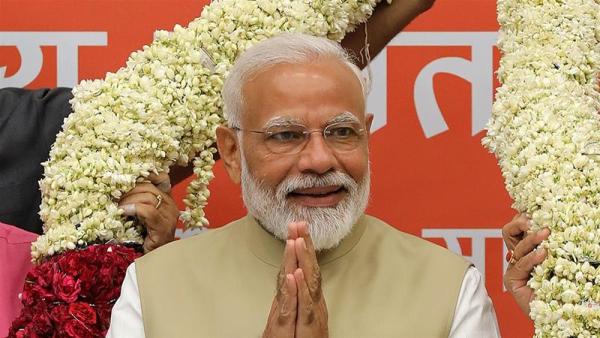 Prime Minister Narendra Modi and his Cabinet of Ministers will take oath of office for the second term (2019-24) on 30 May, 2019 at 7 pm at the Rashtrapati Bhavan. President Ramnath Kovind will administer the process.

The statement said, “The President will administer the Oath of Office and Secrecy to the Prime Minister and other members of Union Council of Ministers on 30.05.2019 at 07.00 p.m. at Rashtrapati Bhavan.”

BJP emerged victorious in the Lok Sabha Elections 2019 with landslide majority. The result of the election was declared on 23 May. Incidentally, Narendra Modi is the only BJP leader to have been elected as Prime Minister for two consecutive terms. Although earlier former Prime Minister late Atal Bihari Bajpeyee was elected twice, but his first term had lasted for one year and seven months.

On Saturday, NDA delegation led by BJP President Amit Shah handed over a letter stating that Modi had been elected leader along with letters of support from the NDA constituents.

On Monday, Modi along with Shah visited Varanasi, his parliamentary constituency, for the first time after the victory. After visiting Kashi Vishwanath temple to offer prayers, Modi addressed the BJP party workers in the state where he was accompanied by the state Chief Minister Yogi Adityanath and Shah.

In his address, Modi said, “All of you had ordered me ‘you can’t set foot in Varanasi for a month’. The nation might have elected me as the prime minister but for you, I am a worker. For me, your orders were the priority.”

He also said, “The polls in 2014, 2017 and 2019 mark a hat-trick of wins in Uttar Pradesh. Each of these wins is special and should be studied very carefully by political analysts. Uttar Pradesh is further strengthening the country’s democratic fabric. The perception around us (BJP) has been vicious, sometimes even telling everyone that we are dangerous and we should be stayed from but India has shown that to political pundits and therefore there is no alternate of transparency and hard work for us.”

Prior to his visit to Varanasi, Modi visited Gujarat, his home state on Sunday to seek blessings of his mother in Ahmedabad. While addressing a rally there, he had said, “After the sixth phase of polling, I had said that it’s 300 plus for us. When I said it, people mocked me. But the results are for everyone to see.”