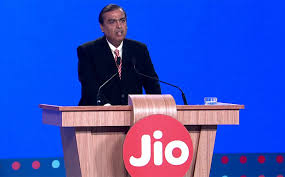 Reliance Jio has announced the launch of broadband services in India titled JioGigaFiber.

At the Annual General Meeting of Reliance, it was announced thatdata speeds upto  1Gbps and will reach a larger area, with over 1,000 cities upon its launch.

Customers can start registering for this service by August 15th through both MyJio and Jio.com.

“At Jio, we are determined to take India to be among the top-5 in broadband connectivity, both for mobility as well as fibre-based wireline connectivity. We have built future proof networks and will continue to deliver the most advanced technologies to our customers for decades to come,” said Mukesh Ambani.

The company is also focussing on developing its Internet of Things based ecosystem and other futuristic technologies such as Virtual Reality.

The company plans to launch a bunch of new accessories, such as gas leak sensor, siren, CCTVs, and smoke sensor that leverage Jio’s broadband services.