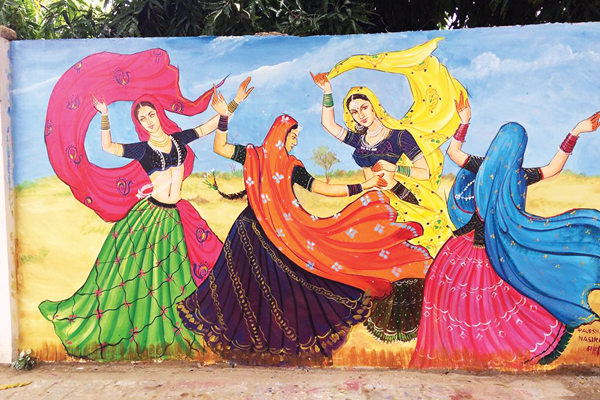 The work to preserve and maintain the cultural and historic heritage of the city is being done at a very low cost in the most artistic and creative manner. The municipal corporation is undertaking facade lighting to highlight the architectural features of some of the heritage constructions.

Since Ajmer is also among the HRIDAY cities, a Kala-Kumbh was organised in which several interesting programmes like – art camp, rangoli workshop, photography, artists’ meetup, heritage walk, etc were organised. The Kala-Kumbh and Rang-Lehar programmes were aimed at reframing the relationship between communities. Very often, it is small and simple ideas that have the power to bring about massive and positive changes in our world. Ajmer Municipal Corporation began this change by asking three small questions which eventually unravelled big answers.

We thought why creative abilities of artists using their brushes and paints are only harnessed on a single canvas when they could take the same tools and transform buildings, blocks and entire neighbourhood. AMC also planned to involve people living in different areas to participate. This is how AMC leveraged the art to engage community members for their own social, cultural and economic development. The process to paint different sections of the city with vivid hues and patterns by people of Ajmer themselves went way beyond the usual neighbourhood beautification drive.

While Rang –Lehar involved pairing artists and communities to transform the urban spaces of city walls, Kala Kumbh included a range of activities such as workshops, art camps and heritage walks. With enthusiastic participation of people, with each individual contributing his or her magical piece of individuality in the artistic fabric of the community, the result was no less then spun gold in terms of people’s local history, culture, social memories, ideas, ideologies, and stories. This is because AMC gave them a platform to contribute to the enhancement of their own neighbourhood. If we talk about the functional modality, Rang Lehar was organised in three phases which involved painting of the walls of within the city on themes on – “The Many Shades of Woman”, “Incredible India” and “Significance of Games, Fitness and Yoga”.

Ajmer is one of the famous cities of Rajasthan. Surrounded by Aravalli Range, this Sufi City is a major tourist attraction among global tourists because of the Dargah of Sufi Saint Khawaja Moinuddin Chisti and Pushkar. The city has also been declared a Heritage City under HRIDAY scheme of Government of India. The work to preserve and maintain the cultural and historic heritage of the city is being done at a very low cost in the most artistic and creative manner. The municipal corporation is undertaking facade lighting to highlight the architectural features of some of the heritage constructions. The corporation has already completed the beautification work of Municipal Corporation Building, Gandhi Bhawan and “Shahid Smarak”.

Hon’ble Chief Minister of Rajasthan Vasundhara Raje has inaugurated a book bank in Ajmer which is aimed at providing books to students. The main motto of the book bank is to increase the interest among students to read books of their interests. Several NGOs and institutions donated books to the bank. The centre has been established in Gandhi Bhawan and so far about 6,000 books have been donated. The initiative has been appreciated by the people of Ajmer a lot. Besides, a mobile library has also been conceptualised.

This serves the students in different areas – at 21 places to be precise – and help students to prepare for several competitive exams. All the books have been provided by the support of citizen of Ajmer. This library is also stationed at various schools and colleges. In order to keep a pace with technology, Kindle – a digital device to read books – have also been arranged. These books and their titles are properly stored in computer software so that it becomes easy to find them when needed. The library is open for all and the membership fee is kept minimal. One can even sit inside the mobile library and enjoy reading.