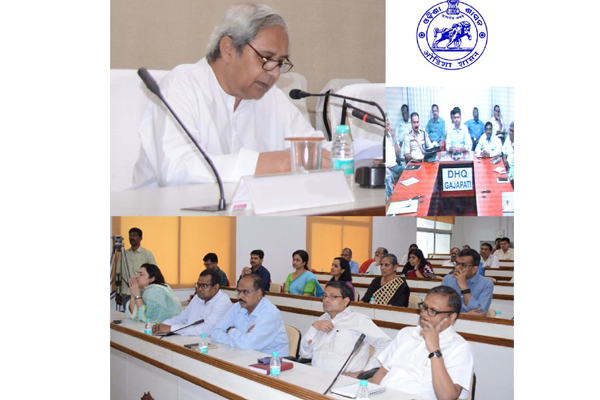 Odisha Chief Minister Naveen Patnaik chalked out a new and empowered Odisha through his ‘Vision Odisha’ plan and shared it with the administrators and State officials recently. Through his video conference address, Chief Minister Patnaik asked them to take the State towards a modern, empowered and progressive new Odisha. He assured them of all out support.

“Take bold decisions keeping people as the focus. I will stand behind you. All your good work will be recognised and rewarded,” Patnaik told the Team Odisha.

Stating that he wants Team Odisha to take the State to the next level of governance, Patnaik said it should be a modern, empowered, progressive new Odisha.

While launching the Vision Odisha, Patnaik said through sheer team work, commitment and pro-people policies, his government has come a long way in the last 17 years to look into the eye of the storm.

He claimed the State government has been able to set global benchmarks in disaster management and the country has acknowledged what it has achieved in certain sectors like poverty reduction, reduction of IMR & MMR, ease of doing business, providing rural housing and road connectivity to increasing farmers’ incomes and agricultural production and womens’ empowerment.

Patnaik said: “I fully understand that we need to do much more and put Odisha in a place where other states will look up to us.” He said the recognition of Best Administrator in the country is a reflection of the relentless hard work and dedication of Team Odisha.

“It’s not a mean achievement for a state which suffers from several natural disasters year after year with not much support from successive Central Governments. In spite of this thanks to the resilience of the people of Odisha, we have overcome many odds and reached here,” the Chief Minister added.

Recalling his earlier days in the office, Patnaik said when he took charge in 2000, Odisha was in a state of despair – a state in hopelessly tough situation with endemic poverty, finances in shambles and infrastructure in a pathetic condition, almost at the bottom in most of the socioeconomic indicators.

“All of you have worked for the betterment of the state. Without your hard work and commitment we couldn’t have walked thus far,” Patnaik said to the members of the bureaucracy in the state.

Noting that huge challenges remain before the government, the chief minister said his government stands for people centric governance where the outcome is always measured in terms of empowerment of the citizens.

“Our focus on the 3Ts- team work, transparency and technology is well tested to bring about transformation. All of you must provide adequate leadership to your team where each member will work without fear, deliver the schemes and programmes without favour,” he said referring to officers.

“Let Team Odisha show to the world the way to transform governance for public good. Let Team Odisha resolve to make the state the best state to live in,” he said.

Let Team Odisha create a new brand of development ensuring zero casualty in the face of a super cyclone, build one million houses in two years, better the national average in IMR, move a record 8 million people out of poverty, be the only state to double agricultural income and play a vital role in National Food Security, Patnaik said.

Settle the maximum land rights to tribals under the Forest Rights Act, lead the country by having the number one smart city, have half a million tribal students in residential schools, take up the challenge of hosting a global sporting event in 90 days and set benchmarks in that too, he exhorted.

The Chief Minister was optimistic that the ‘Team Odisha’ can deliver.