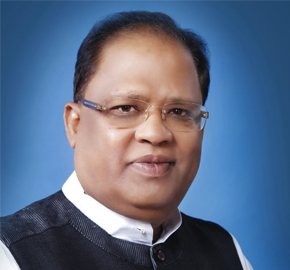 There are three Smart Cities in Chhattisgarh. The State government with its priority for Smart Cities is also planning to integrate e-governance and provide employment opportunities in the other cities of the State as well, says Amar Agrawal, the Minister for Urban Development, Commercial Taxes and Commerce & Industry, Government of Chhattisgarh, in an interview with Arpit Gupta and Gopi Krishna Arora of Elets News Network (ENN).

The central Government has selected two cities – Raipur and Bilaspur from Chhattisgarh under Smart Cities Mission, what initiatives have been taken by the State government to make these two cities smarter?

Raipur and Bilaspur were added to the Smart Cities’ list earlier. Recently, Naya Raipur has also been included in the list. This way, three cities from Chhattisgarh will be developed as Smart Cities.

As far as developing Smart Cities in the State is concerned, the work is progressing at a very fast pace even in its maiden year. Soon, we are going to issue tenders for various development projects related to Smart Cities. Other than Smart City projects, we are also working on other projects like 24X7 water supply, 24X7 electricity supply and implementing revenue reforms etc. Various autonomous bodies are constituted to govern and supervise aforementioned projects and other projects for Smart City development. These bodies will help to ease the processes.

“We are planning to replace autorickshaws with e-rickshaws. Moreover, such initiatives will be implemented in the cities other than Smart Cities as well.”

The State government on its own is trying to develop Korba, Rajnandgaon and Bhilai as Smart Cities under Public Private Partnership (PPP) model. These cities will be developed as per the guidelines of the Central Government. We have also appointed a consultant for the Smart Cities. It is our effort to realise Prime Minister Narendra Modi’s dream by developing other cities of Chhattisgarh smartly.

Chhattisgarh Government has developed Naya Raipur as India’s first “Greenfield City”, how the government is planning to develop the Smart Cities at the same paceas that of Naya Raipur?

It is easier to develop a new city as a “Greenfield City” or “Smart City” but to transform an old city into a Smart City has different types of challenges. However, Smart Cities are the government’s top priority. We are planning to incorporate facilities like e-governance, Wi-Fi, ecotourism, pollution control and waste management etc in old cities. For example, we are planning to replace auto-rickshaws with e-rickshaws. Moreover, such initiatives will be implemented in the cities other than Smart Cities as well. What kind of challenges are there in the Urban Development Department while developing infrastructure in Naxal affected areas? how are these challenges tackled?

We have tried our best to make available the basic amenities like education and health in Naxal-affected areas. As far as roads are concerned, with the help of security forces, road construction is being done at a rapid rate. It is wrong to say that the “Naxalism” is due to underdevelopment or there is no development in Naxal affected areas.

You are also handling the Industries Department. What initiatives have been taken by the Chhattisgarh Government to promote business and investment in the state?

We have different policies to attract industries like automobile, electronics etc. Chhattisgarh’s rich natural resources are also a reason for industries planning to invest in the state. Chhattisgarh is at second place in the country in promoting industralisation in the State. We have invested around Rs 1,000 crore to generate employment opportunities in food technology sector for the youths.

“Our efforts are not limited to national level but we are also trying at global level to showcase the State as “Preferred Business Destination.”

We are developing Electronics Parks, Plastic Parks and Herbal Parks. There is a plethora of employment opportunities in Chhattisgarh and after GST, there will be a boost in manufacturing and services sector. Our efforts are not limited to national level but we are also trying at global level to showcase the State as “Preferred Business Destination”.

Are there any schemes by Chhattisgarh government in line with the central government’s schemes like Make In India, Digital India, Skill India etc?

Chhattisgarh is among the few states for implementing the Government of India’s schemes. We are trying to implement schemes like Swachh Bharat Mission and Housing for All in our state. I would like to thank our Prime Minister to make it compulsory for every branch of each bank to provide loan to at least one SC and one ST customer. We have also formulated a policy for “Startup India” after that we received around 4,000 ideas for startups. After selecting better ideas we will support them. Central government’s policies are helping us in implementing our strategies quickly. In order to work effectively and within deadline, we allot State’s share timely.