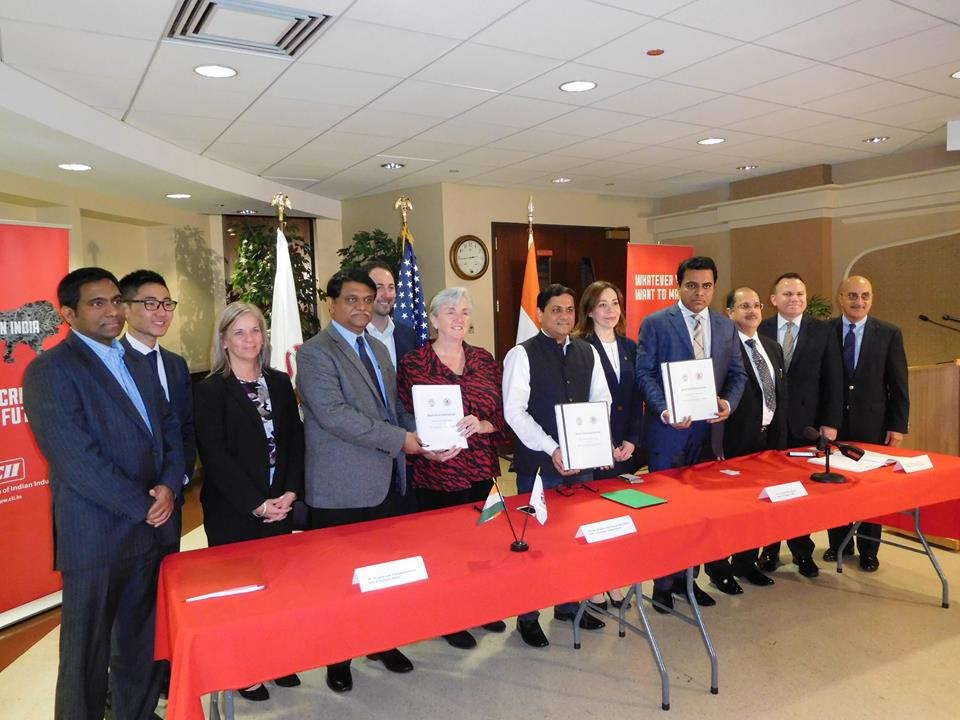 The Telangana Government and the Government of Illinois State has signed a memorandum of understanding (MoU) for collaboration, interaction between the two States in various fields in the form of sharing expertise.

On behalf of Telangana Government, Principal Secretary (Industries and Commerce), Arvind Kumar and on behalf of Illinois, Secretary of Innovation & Technology and Chief Information Officer, Hardik Bhatt signed the MoU at Chicago on October 17, 2016.

Minister for Industries and IT K. Taraka Rama Rao (Telangana Government) and Consulate General of India in Chicago Dr. Ausaf Sayeed were also present at the event. The MoU was signed to promote Telangana and to attract investments to the State. According to officials, the agreement would facilitate cooperation in the areas of Smart State Solutions, e-Governance, entrepreneurship, innovation, business incubators, job creation and best practices between the two States. Under the Smart State solutions, Illinois State would introduce “Array of Things” sensors for air pollution monitoring in Telangana.

The best practices, tools and processes for disaster/emergency management, data management, data analytics, open data and Intelligent Transportation Systems would be shared between the two States through this MoU. Further, the MoU would also aim at promoting entrepreneurship in both the States by facilitating interaction between entrepreneurs and holding hackathons for high citizen impact applications.

As part of cooperation in e-Governance, the two States would strive to transform the State agencies by incorporating communications and information technologies into their operations. The two governments would share information and insights on the e-services implemented in Illinois and Telangana, evaluate them for their effectiveness and impact on citizens.