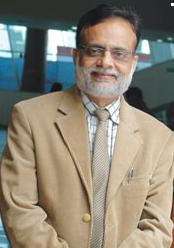 Hasmukh Adhia till now was working as Additional Chief Secretary, Finance Department, Government of Gujarat.The Gujarat cadre officer has a doctorate in yoga from Swami Vivekanand Yoga University, Bangalore and was the brain behind the karamyogi programme to rejuvenate the bureaucracy in Gujarat.

Earlier,Hasmukh Adhia was Principal Secretary, Education Department from April 2008 to January, 2013; Principal Secretary to Chief Minister, Gujarat from May 2004 to May 2006. Prior to this, he has also worked as Director, Department of Industrial Policy and Promotion, Ministry of Industry, New Delhi from 1994 to 1999. Adhia has also held the position of Industries Commissioner, Managing Director, Gujarat Industrial Investment Corporation as well as Vice Chairman & Managing Director, Gujarat Industrial Development Corporation.