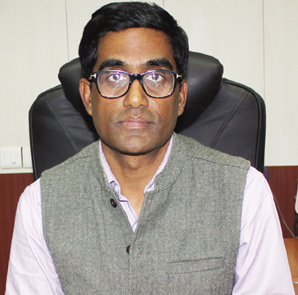 “For any engineering organisation, it’s very important to have thrust on capacity building in modern technologies,” says Pratyaya Amrit

Today there seems to be an enabling and conducive environment for development in Bihar. In your opinion, how have things have improved over the years?
There are two ways to look at this. If you ask me as an officer, I personally believe that irrespective of the time and the government that is in power, if an officer wants to work and deliver, there is nothing that can stop him. Earlier also there were officers who were keen on doing good work in the state. The only difference is that the atmosphere is conducive in a sense that receptivity and acceptability of ideas are better and high. Therefore, things are happening in the state if you see post 2006 especially in the field of roads, health, law and order and education. Although the officers were also working earlier, but the enabling environment post 2006 has been conducive for development.

There was decentralisation of power so that decisions could be taken quickly. We started mobile inspector software. We enabled our engineers with GPS enabled phones and vehicles were outsourced. The entire design part was outsourced. We also introduced the concept of supervision consultants. Lot of thrust was given to quality, monitoring and field visit. I must have travelled more than 40,000 km in three-and-a-half years. Between April 2006 and June 2008 all the pending bridge projects were completed. We also bagged projects of almost `6000 crore and started working on that. From 2006 to till date, we have constructed more than 1500 bridges.

You are using technologies like mobile inspector or android applications for monitoring various road construction projects across the state. Please tell us about that.
This idea of mobile inspector software is very unique and new. We were the first ones to try it in the country. It so happened that I realised that the number of bridges being executed was more than 200 and we were working for the one fourth of our strength. In any infrastructure project, it’s very important that quality check must be conducted through a field visit. One of the complaints in initial days I used to get was that many of the engineers mostly stationed at headquarter and never used to go out. So we implemented the idea that any engineer on field visit must click photos with GPRS camera and send it to the central server. To click the photograph, they had to reach the spot. This made field visits important. Once they used to click the photograph and send me in a customised format, we started getting the real time report sitting in Patna or anywhere else. This initiative also led to vast decrease in complaints from the MLAs.

You have also created a lab in Patna. What is the role being played by this lab?
For any engineering organisation, it’s very important to have thrust on capacity building. This is one area where things are changing on a day-to-day basis. So, we got a state-of-the-art lab and computerised everything. We sent lot of our engineers abroad and in other parts of India a part of incentive package. I still remember when this Mumbai bridge-Worli Sea Link was inaugurated, I sent 12 of my engineers for three days. They were taken around and a presentation was given by Mumbai State Road Development Corporation. We have grabbed these opportunities. We have in-house training system. And I think in Road Construction department, more than 100 engineers have been to US, Canada, Singapore, Australia and other places. This has hugely impacted their style of working. I can proudly say that many of my engineers are quite well conversant with the latest techniques and thoughts. For instance, we are executing public private partnership (PPP) projects. In Bihar in 2004, people could not distinguish between pothole and road, but today we are taking about PPP and have more than 3000 crore projects underway.

The road density in Bihar has gone up to 126.13 km from the 111-km mark of 2008, but it is still below the national average of 322.77 km. What are you doing to bring improvement in the road density of the State?
We have worked consciously on this issue and have seen improvement from 2006 to till date, but this is one thing which needs lot of funds and thanks to the ADB funding and some support from World Bank for making lot of bridges. It’s a conscious effort of the government that for last five years or more, we have consistently got almost 20 percent budget of the state government. And more money means more and better roads and definite improvement in this figure.

Very recently chief minister said “Our next target will be to make travel time from any village in the state to the capital Patna by roads within 6 hours,” How you are going to do it. Isn’t it huge task?
We must understand the background of this. I am looking after the road construction department, there is another department that looks after rural works department. What CM meant was now there is lot of thrust on rural roads and he has sanctioned lot of money. So, what he is telling is that once these roads are constructed, then it would take less time to reach from one block to another block or Patna. With the number of many bridges which we have constructed or are in the pipeline, things will definitely improve. We are going for Rs 500 crore work from Gopalganj to Sahibhganj in Muzaffarpur. Now, it takes four hours to reach Gopalganj from Patna, once this bridge is constructed, it will take you two-and-a-half hours. Similarly in Aurangabad, we are making an Rs 500 crore bridge. People use to take 9-10 hours to go to Saharsa. Now, it’s taking four-and-ahalf hours. So, it’s absolutely achievable. And I think five hours target is very reasonable. And I think in maximum two years, it should be achieved.