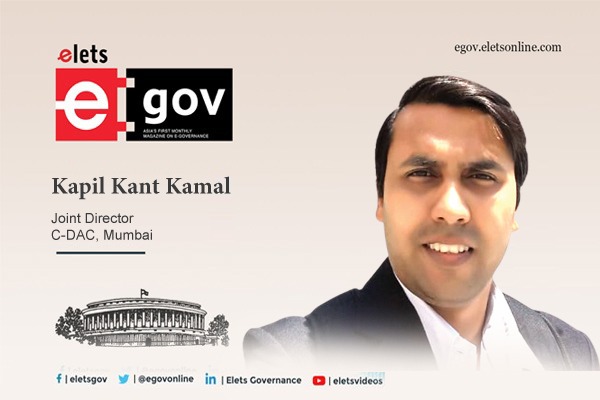 To make India a digitally empowered society, the Digital India programme was introduced in 2015. C-DAC, an autonomous scientific society under the Ministry of Electronics & Information Technology (MeitY), has created a number of national projects to support the online public service delivery system and has been supporting the digital mission. In an exclusive interview Kapil Kant Kamal, Joint Director, C-DAC, Mumbai, shared the transformative initiatives of C-DAC with Nisha Samant of Elets News Network (ENN). Edited excerpts.

C-DAC has been instrumental in promoting digital acceptance across major public sectors and Govt. entities. What are the key projects or solutions in EGovernance?

Centre for Development of Advanced Computing (C-DAC) is an Autonomous Scientific Society under the Ministry of Electronics & Information Technology (MeitY), Government of India. C-DAC is involved in developing end-to-end state-of-art products, systems, services and solutions. C-DAC has been at the forefront of the Information Technology (IT) revolution, constantly building capacities in emerging/enabling technologies, innovating & leveraging its expertise, skill sets to develop/deploy IT products and solutions for different sectors of the economy.

Government agencies developing public digital services in a number of industries, including transportation, health, education, agriculture, logistics, mobile computing, etc., have received technical assistance from C-DAC and key initiatives thanks to its work. The standard, smooth interface provided by these initiatives and solutions will make it simpler for people to access services. Modern technology and standards were incorporated into the architecture and development of these platforms to ensure interoperability and encourage data sharing for improved online services.

To make India a digitally empowered society, the Digital India programme was introduced in 2015. Additionally, C-DAC created a number of national projects to support the service delivery system.

Some major e-governance solutions / services of C-DAC are:

e-Pramaan (MeriPehchaan): A National e-Authentication framework to authenticate users safety and security for accessing services through desktop as well as mobile platforms. E-Pramaan also provides Single Sign On (SSO) to various e-Gov services and is a part of Nation SSO – “MeriPehchaan” which was launched by Hon’ble Prime Minister Shri Narendra Modiji in Digital India Week, on 4th July 2022. e-Pramaan provides multiple factors of authentication such as password (Text, image), OTP (SMS, email, smartapp), Digital signatures (provided by Indian CA) and Biometric (Finger, IRIS, Face) authentication. Biometric authentication is carried out using Aadhaar. The solution not only provides authentication but also ensures the security for which it has many fraud management techniques implemented. It also has identity verification using Aadhaar, PAN, Driving License etc which helps in mapping the virtual identity to physical identity especially essential for e-Governance services.

Aadhaar Data Vault: IDs like Aadhaar are sensitive data and should be stored securely. Aadhaar data vault stores Aadhaar numbers in an encrypted format and generates a reference number to access it. Hence, the Aadhaar number is locked securely in the vault with its decryption key in Hardware Security Module (HSM). The reference number is different for each service. C-DAC provides Aadhaar Data Vault as a solution as well as a service.

C-DAC’s Aadhaar Ecosystem: Aadhaar-related authentication services are accessible only through ASA and AUAs who are trusted partners of UIDAI for providing Aadhaar services. C-DAC is an ASA as well as AUA provides access to various Aadhaar Services such as auth, e-KYC.

Mobile Seva: Government uses SMS services extensively to communicate with their citizen users. Mobile Seva is a Platform to deliver government services to citizens over mobile devices using SMS, USSD, Voice, LBS, and/ or mobile applications. More than 4000 departments are making use of this platform which provides these services on very economical charges. The infrastructure is such that it is handling more than 70 crore transactions per month.

mSeva AppStore: It is India’s own indigenously developed very secured and trusted app store providing a great opportunity for mobile app developers to host their apps and trust guarantee. The apps go through rigorous security tests before hosting, thereby providing security assurance to the citizens while downloading the apps from the Appstore. Like all other Appstore, there is a rating system, feedback system, recommender system, and app classification available on mSeva Appstore. It’s a great opportunity for Indian mobile app developers to host their applications.

eSanjeevani: A web-based comprehensive telemedicine solution which has served 68,619,839 patients till date. It extends the reach of specialised healthcare services to masses in both rural areas and isolated communities. It is used to provide medical education to interns, people across various Common Service Centres (CSCs), etc.

e-Hastakshar: It is C-DAC’s indigenously developed online e-Sign service which facilitates digital signing of electronic documents to citizens in a legally acceptable form. Any individual with a registered mobile number with Aadhaar can sign a document anywhere and anytime based on on-line authentication services of Aadhaar. C-DAC is also an empanelled eSign Service Provider (ESP) and a Certifying Authority (CA).

The governments in India have gone for revamp with rapid digitisation of public service. What is the role of Mobile Governance in the digital-led future?

The aim of the government of India is to promote e-Governance & m-Governance schemes, with the unveiling of the Digital India Programme. The overarching vision of the programme is to transform India into a digitally empowered society and knowledge economy. With 1.38 billion people and two-thirds of them below the age of 35, the world’s largest youth population “India” is poised to become one of the world’s leading markets in Mobile Apps. This surge can be considered as an opportunity to regulate and organise this industry for promoting an indigenous app hosting platform. Government backs the need for a trusted indigenous platform for mobile apps by keeping the hunt on in between various availability.

With the implementation of Mobile Governance platforms, citizens can avail of integrated public services through multiple mobile-based channels in a seamless and timely manner. This will benefit citizens to keep a track of Government-to-Citizen (G2C) communications and transparently receive timely updates.

Mobile Seva’ is a countrywide initiative under mobile governance that aims to enable all government departments and agencies to provide services through various mobile channels such as short message service (SMS), integrated voice response system (IVRS), Geo-fencing, mobile applications, and Appstore. mSeva AppStore has hosted more than a thousand apps for Citizen & Department trust. The AppStore Framework now has opened for all entities of the society to host their secure apps freely. It’s a big initiative of GoI keeping in mind the welfare of the Indian mobile app developers and citizens of India as the indigenously developed Appstore ensures the security and authenticity of the
hosted apps.

Can you throw some light on this National AppStore (various challenges, features, and some examples, programs, etc.?

mSeva AppStore is the government’s mobile application store, set up under the guidance of the Ministry of Electronics and Information Technology under the umbrella of the ‘Atma Nirbhar Bharat Mission’ scheme. It is the nation’s first indigenous AppStore which is a trusted and authentic app ecosystem. It has been created to provide Indian mobile application developers with a hosting platform for their mobile applications.

The mSeva AppStore is available at https://apps.mgov.gov.in. Every App goes through two levels of security check before getting hosted on the Appstore and hence provides the assurance to the citizens of the security and authenticity of the available apps. The security tests are done free of charge for the developers and complete handholding is provided to overcome security concerns of the app. The Appstore has all the features like rating system, feedback, recommendation system, app classification etc which are sought by developers as well as users. Over 3000+ organisational and individual developers are already integrated with the platform and availing services with authenticity. 8.7 cr application download by users from mSeva AppStore for accessing various government/public services anytime from anywhere.

C-D AC is the implementing agency and is also maintaining this indigenously developed Appstore. Now it is open for all sectors.

What makes this National Appstore different from the group?

India’s smartphone market is predicted to reach a whopping 820+ million by the year 2022. As of today, India is among the largest mobile markets in the world. With such a huge market, there is a requirement for an indigenous platform for hosting Indian Apps with our own policy and guidelines for developers. mSeva AppStore takes this emergent scenario as an opportunity to provide a platform with government trust and security.

In today’s scenario, choices are unlimited when it comes to availing and providing digital services. But the best among the group will always stand out regardless of its initial phase challenges. The same goes with this native Appstore, which stands out in the market with its firm policies yet successful in gaining trust of its stakeholders by maintaining the secure App Ecosystem. It is not charging any fees that drives the Mobile App Industry to be financially independent while choosing this AppStore. Again, the intramural testing ensures the integrity and privacy of the App data. The Government, the App industry and the citizens, every stakeholder will be benefitted by this indigenous platform.

According to you, what are the challenges in the digitisation of service?

The real digital transformation is moving from silos approach to system approach and providing smooth end to end services. Earlier data capture systems were isolated from ICT, now data can be captured through mobile, IoT devices, drones, etc which are connected with IT infrastructure. So, the entire paradigm has changed. Now it is a capturing system for delivery of services and all the things dependent on the data centres and because every device is a data point and every person generates data, so at every point you require security. Now we have to increase computing power, network, bandwidth, storage, provide services/ mobile apps in local languages and to build zero trust security in all components.